The year 2021 marks the 60th Anniversary of APDA, which was founded in 1961. This milestone has given us the chance to look back at our accomplishments over the past 60 years and reflect on what we have achieved – and also what we have yet to achieve. One of the key pillars of APDA’s mission is the support of research designed to unlock the mysteries of Parkinson’s and ultimately put an end to this disease. APDA has been a funding partner in many major Parkinson’s disease (PD) scientific breakthroughs, investing more than $51 million in research since its inception.

Today, we will look at two of these major PD scientific breakthroughs that are part of APDA’s legacy.

In 1957, Dr. Arvid Carlsson demonstrated that dopamine was a neurotransmitter, or brain chemical, that was important in movement. After these observations, doctors tried to treat people with 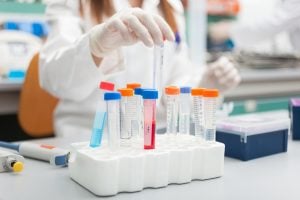 PD with levodopa, a precursor of dopamine, that unlike dopamine was able to cross the blood brain barrier. These efforts were not successful, mostly because people could not tolerate the doses of levodopa required to improve movement. Doctors may have given up at that point if not for the crucial work of Dr. George C. Cotzias, who gave people small doses of levodopa every two hours, building up to the doses that were beneficial for movement. In this way, Dr. Cotzias demonstrated that levodopa was an effective and feasible treatment for Parkinson’s disease.

Dr. Cotzias worked on many crucial elements of levodopa treatment. In this paper shown below, he made the critical observation of what is now called the levodopa “protein effect”, that in some people, diets high in protein can interfere with levodopa absorption and decrease the efficacy of the medication.

Although levodopa remains the most effective treatment for Parkinson’s, research scientists have built upon the discoveries of Dr. Cotzias to devise a whole variety of new ways to deliver levodopa to the brains of people with PD. Read more about these formulations of levodopa

APDA is proud to have supported the pioneering work of Dr. Cotzias, and in 1979, APDA’s  George C. Cotzias Memorial Fellowship was created in his memory. This award supports a promising physician-scientist over a three-year period, allowing for early-career development in research and patient care of PD. It has been awarded to 30 individuals since it was established, six of whom became department heads (or higher) at major academic medical centers.

Here are the accomplishments of just a few of the past recipients of the George C. Cotzias Memorial Fellowship. (The year is which they won the Cotzias Fellowship is in parenthesis next to their name):

Dr. David Eidelberg (1995) – is the Susan and Leonard Feinstein Professor of Neurology and Neuroscience and has served as director of the Center for Neurosciences at the Feinstein Institutes for Medical Research in Manhasset, NY since its founding in 2001. His research focuses on characterizing the brain networks in PD and related disorders using imaging techniques, such as PET scanning and functional MRI.

Dr. David Standaert (1996) – is the John N Whitaker Professor and Chair of Neurology at University of Alabama School of Medicine at Birmingham. His research focuses on understanding the molecular causes of PD including the role of inflammation in the development of PD. Dr. Standaert serves as the Chairman of APDA’s Scientific Advisory Board.

Dr. Talene Yacoubian (2007) is an Associate Professor of Neurology at University of Alabama School of Medicine at Birmingham. Her research focuses on understanding the mechanisms that contribute to development of PD including the mechanisms by which abnormal alpha-synuclein propagates in the brain.

Dr. Vivek Unni (2016) is an Associate Professor of Neurology at Oregon Health & Science University in Portland, OR. His research focuses on understanding the role of alpha-synuclein in the development of PD using advanced imaging techniques in the live mouse brain.

APDA also played a pivotal role in another major breakthrough in our understanding of PD – the discovery of alpha-synuclein as a key factor in development of Parkinson’s. I first told this fascinating story in a previous blog.

Up until the late 1980s, PD was understood to be caused mostly by environmental factors and not faulty genes. Dr. Roger Duvoisin was one of the earliest chairmen of APDA’s Scientific Advisory Board (SAB), and a prolific PD researcher. At the time, he worked at Robert Wood Johnson School of Medicine in New Jersey, which was, and continues to be, an APDA Center for Advanced Research. Duvoisin was a firm believer that genetics were not significant in the development of PD and in the 1980’s, he was involved in epidemiologic studies which attempted to show that genetic factors did not play a major role in the development of PD.

What changed this thinking and led to a revolution in PD research that continues today, was the discovery in 1990 of the Contursi family, a large family in Italy who had, what appeared to be, autosomal dominant PD, which meant that PD was found generation after generation, and children with a parent with PD had a 50% chance of developing the disease.

By 1997, researchers including Golbe and Duvoisin discovered that the family harbored a mutation in alpha-synuclein, now known to be the fundamental component of the Lewy body, the pathologic hallmark of Parkinson’s.

It is hard to overstate how important this discovery was in our understanding of PD. Since 1997, a tremendous amount has been learned about alpha-synuclein and its role in PD. This knowledge has been transformed into potential therapies for PD and today, multiple clinical trials are focused on manipulating alpha-synuclein pathology to treat PD and hopefully slow down the disease.

APDA continues to fund cutting edge research to help advance our understanding of PD and help bring us closer to more effective treatments, and eventually, a cure. Learn about what we are currently funding here.

To support your local APDA-funded Breakthroughs in Parkinson’s Research chapter, please click the button below: