How carbidopa/levodopa is used to treat Parkinson’s disease symptoms

Loss of neurons in the brain that use dopamine to communicate is one of the hallmark features of Parkinson’s disease (PD), causing slowness, stiffness, tremor and balance problems. Replacing the brain’s dopamine is therefore one of the key treatment strategies to help improve the motor symptoms of PD. Dopamine itself does not cross the blood-brain barrier and therefore can’t be used to treat PD. Instead, levodopa, a precursor of dopamine, which does cross the blood-brain barrier is used. If levodopa is ingested by itself however, it breaks down in the bloodstream before it crosses into the brain, so levodopa is typically ingested with another medication that stops it from breaking down. In the US, the combination of carbidopa/levodopa is used. 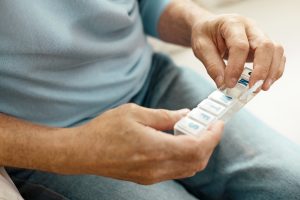 Carbidopa/levodopa is the mainstay of treatment for PD and is the most effective medication currently available for PD. APDA research support played a role in the discovery of levodopa for PD treatment when we funded the work of Dr. George C. Cotzias back in the 1960s.

While carbidopa/levodopa remains the most effective medication for people with PD, it is available in various strengths and delivery systems which makes understanding all the available levodopa options very confusing. To help you make sense of the many options, I will describe the various levodopa formulations and the rationale for using each one.

Carbidopa/levodopa immediate release (brand name Sinemet) is the original formulation and the one that is most frequently used.

Early on in PD, a dose can last six hours or longer, but often, as PD progresses, a levodopa dose tends to relieve symptoms for shorter and shorter amounts of time. A person may take a dose of levodopa and have good symptom relief for a period of time, referred to as ON time. Then the effects of levodopa may start to wear off and symptoms of PD return for a period of time, referred to as OFF time. This phenomenon of alternating between ON and OFF time is known as motor fluctuations. There are many strategies that your doctor can try to smooth out your response to medication throughout the day and these are summarized in a recent APDA webinar.

This is a formulation of carbidopa/levodopa that was originally designed to be extended or controlled release. For some people it works well as an option to extend the life of a dose of carbidopa/levodopa. Sometimes, this medication is prescribed at bedtime to help with nighttime symptoms and to try to prevent OFF time in the morning. The brand-name version of this medication is no longer being manufactured, although a number of generics are available. The dosages of this medication are 25/100 and 50/200. Again, the first number refers to the milligrams of carbidopa in the pill and the second number refers to the milligrams of levodopa in the pill.

Despite its “extended release” formulaton, for many people this formulation does not last longer than carbidopa/levodopa immediate release. Other formulations were therefore designed to achieve this goal.

This is a combination medication of carbidopa/levodopa and entacapone, designed to last longer than carbidopa/levodopa alone. Entacapone is a COMT (cathechol-O-methyltransferase) inhibitor which, in a manner similar to carbidopa, inhibits the breakdown of levodopa in the periphery and allows more levodopa to cross the blood brain barrier and get converted into dopamine in the brain. This medication comes in a number of dosages as follows:

In this formulation of carbidopa/levodopa, the medication exists in varying sized beads within a capsule. The different sized beads dissolve at different rates, allowing for a more prolonged release of the medication from the stomach. Four strengths are available: 23.75/95, 36.25/145, 48.75/195, 61.25/245 (with the first number again referring to the milligrams of carbidopa in the pill and the second number refers to the milligrams of levodopa in the pill.) A typical dose of medication is three capsules, three to four times a day. Capsules can be opened and the beads can be added to food without losing their extended release properties. This can be useful for someone with swallowing difficulties.

Instead of taking carbidopa/levodopa in a pill form, people with PD can receive carbidopa-levodopa in a gel form infused directly into the small intestine where levodopa is known to be absorbed. This system can be useful for those with advancing PD who have motor fluctuations that are no longer controlled by oral medications alone. The system can be particularly helpful for those who have gastroparesis, or delayed gastric emptying, which is a common non-motor symptom of PD and can keep oral medications stuck in the stomach and therefore unable to be absorbed readily by the small intestine. 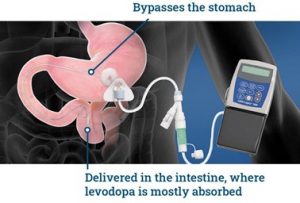 This is how the system works (diagram above). In a minor surgical procedure, a gastroenterologist inserts a PEG/J (percutaneous endoscopic gastrostomy with jejunal) tube with one end in the small intestine and the other end emerging from a stoma or hole in the abdominal wall. The tubing that emerges from the abdomen is then attached to a small portable pump, which can be worn in a carrying case over the shoulder or around the waist. The pump is in turn connected to a cassette of carbidopa/levodopa gel.

After the system is inserted, the person with PD works with his/her neurologist to find the right settings for the pump. There are three doses of medication (also called a bolus) that need to be optimized:

Your doctor will show you how to properly care for the stoma and explain any potential issues to be mindful of.

For someone with Duopa in place, the daily routine may be as follows:

Carbidopa/levodopa formulations to be used as needed

This formulation of carbidopa/levodopa dissolves in the mouth. Although it is absorbed in the gut, the fact that it does not have to be broken down in the stomach means that onset of action of the medication is somewhat quicker than regular Sinemet. It is also useful for those who have difficulty swallowing pills.

This is an inhalation formulation (containing only levodopa) designed for quicker onset of action, to be used as needed if medication effects wear off between oral doses of carbidopa-levodopa. The dose is taken when PD symptoms start to return. Absorption of the medication takes place through the lungs which bypass absorption through the gastrointestinal tract. When a person is experiencing return of his/her symptoms, he or she breaks a blister pack containing a 42 mg levodopa capsule and inserts it into the Inbrija inhaler device and inhales through the device. Then a second capsule is inserted into the device and inhaled (one dose is two capsules). This can be done one time during each OFF period, up to five times a day.  The inhaler cannot be preloaded with the capsules which must stay in their blister package until immediately before use. Only an Inbrija inhaler can be used with the levodopa capsules.

While we already have quite a few options, researchers are constantly looking for new and better formulations of carbidopa/levodopa. Everyone experiences PD differently, so the more medication options your doctor has to choose from, the better he/she can find one that works best for your specific needs. There are a number of carbidopa/levodopa formulations in the research pipeline now which I’ll explain below. We’ve also put together an overview of additional medications (beyond carbidopa/levodopa) in the research pipeline.

This is a pill with an innovative design, which involves loading the medication onto thin films which are then folded into a wavy shape and placed within a capsule. The pill enters the stomach and releases the medication more slowly than a regular pill as the films containing the medication unfurl. The Accordion pill was studied in a phase 3 multi-centered double-blind, randomized trial that included 320 patients. Unfortunately, the trial did not demonstrate a statistically significant reduction in OFF time as compared to immediate release carbidopa/levodopa. However, the data continues to be analyzed and further trials may be planned.

Subcutaneous infusions that are being researched as treatments for PD

This is a carbidopa/levodopa subcutaneous infusion system which is under investigation in a phase 3 clinical trial. (NCT04380142) The medication is delivered via a small implantable device that infuses the novel formulation of carbidopa/levodopa under the skin. The study compares the efficacy, safety and tolerability of a continuous infusion to that of orally ingested medication.

This is a third subcutaneous formulation of carbidopa/levodopa currently under investigation. A phase 1 clinical trial (NCT03419806) was recently completed which demonstrated safety and showed that adequate levodopa concentrations were reached.

While some of these will not end up being approved for use, the research is still important because we learn from it. As the trials progress, we hope that several of these medications will be approved and added to the arsenal with which we fight PD.

To support your local The many variations of carbidopa/levodopa – the mainstay of Parkinson’s disease treatment chapter, please click the button below: