Planning for the What Ifs, Part Two

Today we continue Parkinson’s Disease: Planning for the What Ifs, a special series of posts to address both motor and non-motor issues of people with advanced Parkinson’s disease (PD). We are defining advanced PD as those who are no longer independent in their activities of daily living, and require help for their self-care such as eating, bathing, dressing and toileting. Remember, PD is a very variable condition and many never reach the advanced stages. Additional background and the full introduction to the series is still available if you missed it.

I receive a lot of questions through our Ask a Doctor feature on our website concerning advanced PD, specifically around mental health issues. In a previous blog, I discussed the management of psychosis and behavioral problems in advanced PD. Today I will discuss cognitive decline/dementia, depression, anxiety and apathy in advanced Parkinson’s disease (PD).

We will briefly review the general principles to consider when facing cognitive decline, depression, anxiety or apathy in someone with advanced PD,

Cognitive decline refers to a decrease in thinking abilities including attention, visuo-spatial skills, memory, planning, judgement, and language. Dementia is defined as cognitive decline that affects a person’s ability to carry out their daily activities. Read an excellent overview of cognitive decline in Parkinson’s.

Whereas Alzheimer’s disease is characterized by memory loss, with other cognitive domains or areas affected at later stages, PD dementia typically has a different profile. Executive dysfunction or the ability to plan and organize activities in order to solve problems and complete tasks with multiple steps, is often one of the first 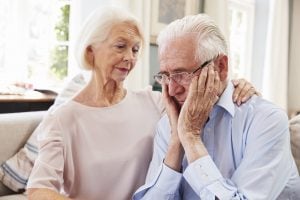 difficulties to be noticed. Visuo-spatial dysfunction in which a person has trouble navigating the world around him/her is often seen as well. Other cognitive domains can be affected as the dementia progresses.

While people with all types of dementia often report that they feel marginalized and ignored by their peers, this is a particular issue in advanced PD. PD often causes lack of facial expression, soft voice, speech that is difficult to understand and decreased spontaneous body movement. These features can be interpreted by those trying to engage with the person with PD as a lack of interest or an inability to interact socially, when in reality these physical limitations do not necessarily reflect what the person is thinking and feeling. Those viewing the person with advanced PD may assume that the dementia is worse than it is. Attempting to converse with a person with advanced PD can be a struggle and only the most persistent will keep trying.

Is it Parkinson’s disease dementia or Dementia with Lewy bodies?

When dementia becomes significant, people with Parkinson’s disease and their caregivers may wonder whether the disease is actually Dementia with Lewy Bodies. Technically, the difference between Parkinson’s disease dementia (PDD) and Dementia with Lewy Bodies (DLB) lies in how quickly the cognitive difficulties develop in relation to the movement issues. In DLB, the cognitive difficulties develop much sooner in the disease course than in PDD, sometimes even prior to the movement difficulties. Because of the similarities between PDD and DLB, current thinking in the medical community is that they should be viewed as related diseases which fall along a continuum of Lewy body disorders. Read a full discussion of Lewy body disorders.

When dementia becomes significant, it can be particularly hard on care partners. Here are some tips to help navigate the cognitive difficulties:

Rivastigmine is the only FDA-approved medication for Parkinson’s disease dementia, although cognitive benefits in clinical research studies are modest. Other medications in its class are often also used off-label including donepezil and galantamine. Memantine is a medication approved for dementia of Alzheimer’s disease, but it requires further study in PD dementia.

Depression is a mood disorder that causes persistent feelings of sadness. It can be a very early symptom of Parkinson’s, sometimes appearing before motor symptoms, and can also be prominent in more advanced stages as well. Read here for a summary of depression and PD. Although depression in PD can be reactive, that is, occurring in response to the chronic disease state, a more prominent cause is the chemical imbalances of the disease itself.

Depression is one of the mental health challenges of advanced PD that is amenable to treatment with medication. Because of this, when it is not clear if depression is playing a role in a symptom such as poor appetite, or poor sleep, a medication for depression may be tried to see if it offers benefit.

Selective serotonin reuptake inhibitors (SSRIs: e.g., Zoloft®, Paxil®, Celexa® and others) are the anti-depressants prescribed most often in people with PD and depression. These medications are typically well-tolerated and can also treat anxiety, which often accompanies depression in PD. It is important to note, that these medications as a rule need to build up in the body and might not take effect for 4-6 weeks. There are other medications for depression available with other mechanisms of action. If depression in PD does not respond to an SSRI, a referral to a geriatric psychiatrist may be helpful to select an alternative therapy.

Anxiety is the intense, excessive, and persistent worry and fear about everyday situations. Anxiety can be a non-motor symptom in PD at all stages of disease. Read how anxiety and stress are related to PD.

In advanced PD, anxiety can become very prominent and can be increased by hallucinations and delusions. Anxiety can look the same and share many of the features of agitation, discussed as one of the behavioral problems of advanced PD here. For someone with cognitive decline who can’t explain why he or she is upset, it may be hard to tease out an element of anxiety from generally agitated behavior.

SSRIs can be used for anxiety and PD. Other medications are available for anxiety, although some can also lead to sedation, increased imbalance and increased confusion, so they need to be used with caution. If hallucinations or delusions are contributing to the anxiety, treating these can be helpful as well. Please see this article for a discussion of treatment of hallucinations and delusions.

Apathy is defined as a feeling of indifference or a general lack of interest or motivation in activities. It is a common symptom in PD throughout its course as well as in advanced PD. For a full discussion of apathy, please see this article.

Caregivers often struggle with whether they should insist that the person with PD participate in activities, or whether they should be allowed to be content in their apathy. There is no one right answer to how much encouragement to provide. Typically, if an apathetic person is encouraged to do an activity, they will enjoy it even if they would not have pursued it on their own. Establishing a few non-negotiable activities on the weekly calendar can therefore be helpful.

To support your local Planning for the What Ifs - Mental Health Concerns in Advanced Parkinson’s Disease chapter, please click the button below: