Planning for the What Ifs

Today we continue Parkinson’s Disease: Planning for the What Ifs, a special series of posts to address both motor and non-motor issues of people with advanced Parkinson’s disease (PD). We are defining advanced PD as those who are no longer independent of their activities of daily living, and require help for their self-care such as eating, bathing, dressing and toileting. Additional background and the full introduction to the series is still available if you missed it.

I receive a lot of questions through our Ask a Doctor feature on our website concerning advanced PD, specifically around mental health issues.

Read Messages from Our Community Related to Mental Health in Advanced PD: 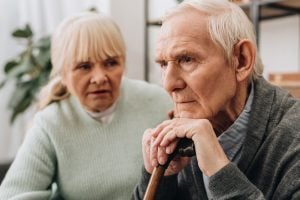 “My Dad fights aggressively when his aides try to get him to do something he doesn’t want to. He gets so angry and is so strong it can take many people to restrain him.”

“My Mom lives at home, but constantly thinks that she is somewhere else and wants to go home. She becomes irritated and angry with the family because she says that we are holding her hostage.”

“My husband is verbally abusive towards me. This is an entirely new aspect to his personality. He was always very loving. Now he is aggressive.”

“My wife is severely depressed. Although she can get out of bed with help, she would rather stay in bed and do nothing. She also doesn’t seem to mind that she is doing nothing all day.”

“Often, my brother doesn’t recognize me when I visit. Last week, I saw my brother in the morning, but when I spoke with him on the phone later on in the evening, he mentioned that he had not seen me in a long while.”

These quotes highlight a set of very problematic issues in advanced PD which include cognitive decline/dementia, depression, apathy, anxiety, psychosis (which encompasses hallucinations, delusions, paranoia), and behavior problems (which encompasses anger, aggression, agitation, irritability, personality changes, mania, impulse-control disorders). One person often has a mixture of these symptoms and the symptoms can be inter-related.

We will examine each of the mental health symptoms that can affect those with advanced PD and discuss non-medication as well as medication management approaches. The rest of this blog will be dedicated to psychosis and behavior problems.  We will address the other mental health issues and symptoms in future blogs in this series.

This set of symptoms encompasses hallucinations, delusions and paranoia. Symptoms of psychosis can be very variable in their manifestation and severity. In addition, the degree of insight into the psychotic thought or vision can be variable as well. As mentioned above, psychosis can lead to behavioral symptoms and needs to be explored as a possibility when behavioral symptoms arise. They can also exist independently of any behavioral symptoms. People with PD are often very reluctant to report these symptoms, for fear that they will be perceived as “crazy”.

Hallucinations are false perceptions. In PD psychosis, hallucinations are usually visual, but they can involve the other senses such as auditory or tactile hallucinations. A person may experience presence hallucinations, during which he or she feels that someone or something is next to them, but when he or she turns to look, nothing is there. In addition, a hallucination may be a fleeting image, perceived out of the corner of a person’s eye, which dissolves when the person turns his/her attention to it.

Delusions are fixed beliefs that contradict reality or rational argument. In PD psychosis, delusions can be of a paranoid nature, including the belief that someone is stealing or that a spouse is having an affair.

The severity of hallucinations varies greatly from person to person. Some hallucinations can be mild, and not bothersome. Sometimes, they can even be pleasant. They can be intermittent and infrequent. However, on the other end of the spectrum, hallucinations sometimes can be very disturbing or even gruesome, and can be persistent.

Some people are aware they are experiencing hallucinations, others are not. A person may misinterpret his/her surroundings and for example, see a pillow as a dog, a vision which dissipates as the person gets closer to the object. A person may also see an image which he/she is able to recognize as a hallucination. On the other hand, a person may see an image that he/she is not able to distinguish from reality. Sometimes a care partner can explain that the image is a hallucination, and this brings insight. Sometimes, no amount of explanation can bring insight and the person with PD is convinced that the hallucination is a part of reality.

Sometimes insight into the hallucination is reassuring. Sometimes however, knowing that the vision is not a part of reality is upsetting in its own right.

As mentioned above, inter-current illness can trigger psychosis and must be investigated. Medication lists must be reviewed for those that may contribute to psychosis. PD meds may need to be lowered in order to address psychosis. If none of these methods lead to a resolution of hallucinations, consider these approaches.

Use of anti-psychotic medications

If hallucinations are bothersome enough to interfere with quality of life and none of the non-pharmacologic methods improve the situation, an anti-psychotic medication may be necessary.

However, it must be noted that all anti-psychotic medications carry an FDA-required black box warning which states that patients with dementia taking anti-psychotics have a higher death rate than those who do not, mostly from cardiovascular disease and pneumonia. Because of this, anti-psychotics in this population should never be used as a method of sedation and should only be used if symptoms are causing significant distress or are an obstacle to providing basic hygiene or medical care.

In addition, most anti-psychotic drugs block the dopamine system and can cause symptoms that are similar to the motor symptoms of PD. Most of these medications can therefore significantly exacerbate the motor symptoms of PD and cannot be used in PD. One medication, pimavanserin, modifies the serotonin system (not the dopamine system) and is approved for use in PD psychosis. Two other anti-psychotics, quetiapine and clozapine, are safe to use in PD even though they do modify the dopamine system and are used off-label (which means that a drug approved for one purpose, is used to treat a different condition) for treatment of psychosis. Clozapine carries a known risk of decreased white blood cell count and requires weekly, and then monthly, blood tests to monitor for this side effect.

Anger, aggression, agitation, irritability and personality change can be a very difficult set of symptoms for loved ones to deal with, especially since they can occur in those who previously had very calm personalities. Outbursts can manifest verbally or physically and can occur in response to a clear stimulus or without clear cause. Those with significant behavioral problems almost always have cognitive impairment as well.

Sometimes the above non-pharmacological methods are not enough to control the behavior. It is important to understand that there are no FDA approved medications to treat behavioral symptoms in the advanced PD patient. Medications are sometimes used off-label. If evidence for the use of these compounds for behavioral symptoms does exist, it is nearly always limited to their use in Alzheimer’s dementia and not advanced PD. Even though none of the medication classes listed below have robust evidence for their use, they are sometimes tried nevertheless because behavioral symptoms can be so disruptive. It must also be noted that many of these medications can cause increased falls, sedation and confusion, so the risks of using these medications must be weighed against any potential benefit.

To support your local Planning for the What-Ifs -- Mental health concerns in advanced PD – psychosis and behavioral problems chapter, please click the button below: