July 30, 2019 – Alpha-synuclein is a protein that is known to clump within the nerve cells of people with Parkinson’s disease (PD) into clusters known as Lewy bodies. Despite extensive research about the protein, many key questions about alpha-synuclein remain insufficiently answered, including: What are the normal roles of alpha-synuclein in the brain? What is the relationship between Lewy body formation and nerve cell death in PD? One of our APDA-funded researchers has uncovered pivotal research that sheds light on these questions. 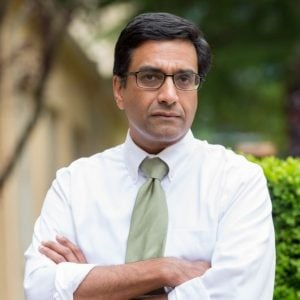 Recently, one of APDA’s George C. Cotzias Fellowship awardees, Vivek Unni, MD, PhD, Associate Professor of Neurology at Oregon Health and Science University in Portland, Oregon, and member of APDA’s Scientific Advisory Board, published a paper which delves into these issues. He discovered that alpha-synuclein does indeed play a vital role in the cell’s nucleus – as a DNA repair protein. In the normal course of a nerve cell’s life, its DNA can become damaged from various environmental insults. Dr. Unni showed that alpha-synuclein is part of the cell’s reaction to this damage, binding to the DNA and helping to repair it. He also demonstrated that with increased clumping of alpha-synuclein into Lewy bodies, less alpha-synuclein is present in the nucleus and more DNA damage is seen.

This new understanding of alpha-synuclein’s function could open up new ways of thinking about treatments for PD. Perhaps a treatment would introduce more alpha-synuclein into the nucleus or help repair DNA in the absence of nuclear alpha-synuclein.

The George C. Cotzias Fellowship is a three-year APDA award granted to a promising young physician scientist to aid in the establishment of his or her career in PD research and patient care. Dr. Unni was granted this Fellowship in 2016 and this year marks his third year of the award. APDA is proud to have played a key role in Dr. Unni’s groundbreaking work.

“Receiving the Cotzias Fellowship from APDA has helped to solidify my career as a physician-scientist, trying to solve the fundamental questions of Parkinson’s disease. The funding has allowed me to test brand new theories about what is happening in the nerve cells of people with PD and may hopefully lead us one step closer to a new treatment for PD,” Dr. Unni said.