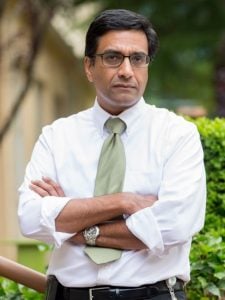 Dr. Unni is an associate professor in the Parkinson Center, the Department of Neurology and the Jungers Center for Neurosciences Research at Oregon Health & Science University (OHSU) in Portland. He is a physician-scientist caring for people impacted by Parkinson’s Disease (PD) and conducting basic scientific PD research. Dr. Unni has undergraduate and master’s degrees from Stanford University and earned his MD, PhD from Columbia University. He completed his internship at St Luke’s–Roosevelt Hospital, and his neurology residency and fellowship in movement disorders at the Harvard Partners-Brigham and Women’s Hospital and Massachusetts General Hospital (MGH) programs. Dr. Unni served on the faculty at Harvard Medical School and was a staff neurologist in the Movement Disorders Division of the MGH Neurology Department until 2011, when he moved to OHSU.

Lewy bodies are associated with the cell death of neurons in Parkinson’s patients, but little is known about what Lewy bodies actually do. Do they cause cells to die, or are they a defensive reaction that protects them, or are they neutral — just a marker that the cell is sick? This is a big, overarching question in the field.

By monitoring the living brains of PD mouse models, Dr. Unni’s team is able to test what happens to neurons that develop Lewy bodies and how this influences cell survival. His recent work shows that neurons that develop Lewy bodies are destined to die within a few months. During the past year, Dr. Unni’s group has focused on understanding why this cell death occurs and what it is about forming a Lewy body that makes cells vulnerable to degeneration.

If we learn more about why neurons with Lewy bodies die, we could develop treatments that stop this process and potentially slow or halt the progression of PD.