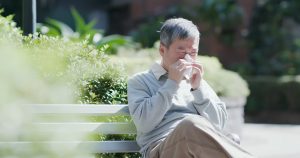 Let’s divide up non-motor symptoms into the following categories:

Symptoms that are commonly associated with PD

These symptoms include sleep disorders, abnormalities in blood pressure, urinary problems, constipation, depression, and anxiety. Even though these symptoms are so commonly seen in PD, they are also commonly associated with other issues that have nothing to do with PD, so it is vital to keep an open mind about their cause. If any symptom is new or worsening, it could be an indication of a new medical problem. For example, urinary problems are extremely common in PD, but may be a sign of an enlarged prostate, which can be treated in an entirely different way.

Symptoms that are unlikely to be related to PD

There are some symptoms that are typically not associated with PD. For example, chest pain, blood in the stool or blood in the urine should not be assumed to be PD-related and likely indicate another medical problem.

Symptoms that may be related to PD

There is a fourth category of non-motor symptoms that I would like to focus on now:

People with PD and care partners may suspect that a particular symptom is related to PD, but they can’t find information about it, so they are not sure. Two symptoms that pop up in this category are runny nose and breathing problems, which we’ll focus on today. Of course, if these are new symptoms for you, they could be indicative of a new problem, including infection with COVID-19, so make sure to get yourself checked out by your doctor. However, if all else is ruled out, PD could be to blame. Excessive sweating and specific skin disorders are in this category as well and have been addressed previously.

Runny nose, or rhinorrhea in medical jargon, is an annoying symptom that has been shown in a number of studies to be more common among people with PD than those without PD. The rhinorrhea of PD is not associated with a viral infection or environmental allergies, or any other common cause of runny nose.

Rhinorrhea can be an early feature of PD, sometimes present at the time of diagnosis. In fact, studies have shown that rhinorrhea is not correlated with disease duration, disease severity, or whether the PD is characterized more by tremor or gait difficulties. One study tested the smell of those with runny nose versus those without and determined that the presence of rhinorrhea did not correlate with deficits in the sense of smell.

There are no studies in the medical literature addressing how to treat the runny nose associated with PD. Ipratropium bromide is an anti-cholinergic medication that does not cross the blood-brain barrier and is available in two forms – an inhaled form to treat asthma, chronic bronchitis and emphysema; and a nasal spray that is used to treat allergic and non-allergic runny nose. The nasal spray may be worth a try in PD-related rhinorrhea.

Although ipratropium nasal spray is typically well-tolerated and is administered locally which limits side effects, it can have more widespread effects. Side effects of ipratropium that may be of particular concern for people with PD include low blood pressure, urinary retention and constipation. As always, discuss any potential new medications with your physicians.

ClariFix Cryotherapy is a relatively new procedure for chronic runny nose. The procedure involves inserting a small device into the nose and freezing a small area at the back of the nasal cavity. It has not been tested specifically in runny nose associated with PD but may be an option to discuss with your physicians.

Usually, trouble breathing is not thought of as a symptom of PD. Those with PD who complain of this will typically have testing of their heart and lung function. This is necessary since, as we continue to emphasize, a person with PD can develop medical problems unrelated to PD and needs every new symptom evaluated like someone without PD. However, often the testing does not reveal a cardiac or pulmonary abnormality. Could difficulty breathing be a symptom of PD itself?

There are a number of ways in which difficulty breathing may be a symptom of PD:

Shortness of breath can be a wearing-OFF phenomenon

Some non-motor symptoms can fluctuate with brain dopamine levels, which means that they change as a function of time from the last levodopa dose. For some people, shortness of breath can be one of the non-motor symptoms that appears when medication levels are low. However, shortness of breath can be due to anxiety which can also be a wearing-OFF phenomenon. Sometimes it is not possible to determine whether the key symptom is anxiety or shortness of breath.  Treatment involves changing medication dosing and timing so that OFF time is minimized. You can view this webinar which discusses the concept of wearing OFF and potential treatments.

Abnormal breathing can be a type of dyskinesia

Dyskinesias (the abnormal, involuntary movements that can be a side effect of levodopa) may manifest as an irregular and erratic breathing pattern. If this is the case, the treatment involves adjusting dosage and timing of levodopa so that dyskinesias are minimized, or adding amantadine or amantadine ER which can reduce dyskinesias.  You can read more about dyskinesias here.

This refers to an inability of the lungs to fully expand with air. Restrictive lung disease can result in shortness of breath with exertion, and can worsen to cause shortness of breath at rest as well. Restrictive lung disease can occur in PD because of rigidity of the muscles of the chest wall as well as bradykinesia, or slowness of the muscles responsible for chest wall expansion and contraction. In addition, people with PD can have abnormalities in the posturing of their trunk including head drop, stooped posture, tilting of the trunk and bending at the waist. These postures can restrict the amount that the lungs can fill up. Treatment usually involves increasing the amount of levodopa.

PD can predispose a person to dysfunction of swallow which can lead to aspiration, or foreign material (e.g. food) entering the airway. Aspiration can cause pneumonia which can substantially impair a person’s ability to breathe. Aspiration pneumonia is diagnosed on chest X-ray and is treated with antibiotics.

SA is a sleep disorder that can be associated with PD. In this disorder, breathing stops and starts throughout the night, leading to periods of low oxygenation in the blood and frequent awakenings. There are two main types of sleep apnea and both may play a role in PD:

Diagnosis of SA is made via Sleep Study, a test which records activity of the brain and body during sleep including brain waves, oxygen levels in the blood, heart rate, breathing, eye movements and leg movements. It is important to note that untreated sleep apnea can raise the risk of heart disease and stroke, and can cause depression, poor memory, headaches, so it is very important to identify and treat it. Treatment of SA typically involves wearing a device during sleep that applies non-invasive ventilation through a nose or mouth mask, called a CPAP machine.