Parkinson’s disease (PD) can cause a whole host of non-motor symptoms, including symptoms related to the skin. This week we take a closer look at these problems.

Seborrheic dermatitis is a common skin condition in the general population, but even more commonly found in people with PD. It causes patches of scaly, red skin and dandruff, primarily on the scalp and on the oily parts of the face such as the sides of the nose. In PD, it is thought to be caused by over-secretion of oils from the sebaceous glands in the skin. In much the same way that dysfunction of the autonomic nervous system (the nerves that control automatic body functions) cause non-motor symptoms in PD such as blood pressure dysregulation and urinary abnormalities, autonomic dysfunction of the nerves that control the oil glands of the face can cause seborrheic dermatitis.

Seborrheic dermatitis usually can be controlled with lifestyle changes or topical creams. Wash your skin regularly and avoid harsh soaps and products that contain alcohol. If the condition does not clear up, an over-the-counter mild corticosteroid cream may help. If simple changes are not effective, then consult with a dermatologist who may want you to try a prescription cream.

Another common skin-related non-motor symptom of PD are sweating abnormalities, or sweating dysregulation. In its most pronounced form, people with PD describe episodes of sudden, profuse sweating that necessitate a change in clothing.  But it could also mean reduced sweating for some people. These episodes can profoundly affect quality of life and can be understandably frustrating and embarrassing. 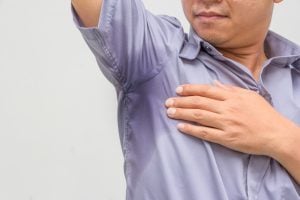 Sweating dysregulation (like seborrheic dermatitis) is also caused by autonomic dysfunction, more specifically the inability for your body to regulate its temperature correctly. In people with PD, there can be pathologic changes in the parts of your brain that regulate temperature, as well as in the nerves that regulate the sweat glands. People with PD may experience increased or decreased sweating, or a combination of both. One common pattern is reduced sweating in the body with increased sweating in the face. Another temperature regulation symptom that some people with PD experience is the sensation of cold hands or feet.

Sweating dysfunction is being investigated as a biomarker of PD. A sudoscan is a medical device which can measure sweat gland function. It has been suggested as a potential diagnostic tool for Parkinson’s. More research needs to be done but it is encouraging whenever potential biomarkers are discovered because they may eventually help us diagnose PD earlier and more accurately.

In other cases, the episodes occur at random, or occur primarily during sleep. Basic lifestyle recommendations to aid in the management of excessive sweating include:

If these simple suggestions are not effective, and often they are not, additional strategies are available. The following are treatments recommended for those suffering from excessive sweating in the general population, and have not been tested specifically in people with PD. In addition, these treatments are generally focal (applied to a particular area) and may not be as effective if sweating is widespread. Discuss these options with your physician:

To support your local Sweating and other skin problems in people with Parkinson’s disease chapter, please click the button below: