Diagnosis of PD is often preceded by a decreased ability to smell. It is therefore ironic that two recent news stories have suggested that people with PD may be able to be identified by others based on their particular odor, one that could potentially be used as a method of PD diagnosis. Could this be true? The quick answer is, maybe. In this blog, we will investigate these news stories and put them in context with other trends in PD research.

Does Parkinson’s have a scent?

The first story highlights a Scottish nurse named Joy Milne who was the care partner for her husband with PD. For many years, she noticed that he emitted a musky odor, but assumed that this scent was unique to him. In 2012 however, she smelled the same odor on a fellow support group member with PD, which led her to question whether this was a wider phenomenon. Her curiosity led her to a collaboration with Dr. Tilo Kunath at the University of Edinburgh in Scotland, who hypothesized that it was possible that PD produces a particular metabolite that gives off a specific odor. Dr. Kunath tested Milne and she was able to correctly identify with incredible accuracy whether a person had PD or not by smelling clothing that that person had worn. This early effort was chronicled in an article in 2016 in Lancet Neurology. 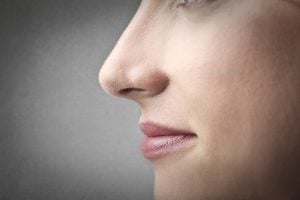 The source of the smell appeared to be the back of the neck, where there are many sebaceous glands that produce sebum, an oily, waxy substance produced by the skin. It is well known that people with PD have increased rates of seborrheic dermatitis which causes patches of scaly, red skin due to over-secretion of oils from the sebaceous glands. One hypothesis for why people with PD have seborrheic dermatitis at higher rates than the general population is that in PD there is dysfunction of the autonomic nervous system that controls the oil glands on the face (in much the same way that people with PD can have blood pressure dysregulation and urinary abnormalities.) Could it be that in addition, the sebum of people with PD is different in some way from that of people without PD?

Dr. Kunath, working with Dr. Perdita Barran, at the University of Manchester in England, analyzed the compounds present in the sebum of people with PD and found a number of compounds that were present in larger amounts in PD (whether they were on PD medication or not) than healthy controls. They recently published their results, establishing that there is potential for sebum analysis to be a biomarker for PD.

What is a biomarker?

A biomarker is a measurable characteristic in the body which indicates that a particular disease is present. A biomarker can be a lab test of any bodily fluid or substance (in this case sebum), an imaging test or even a clinical test (for example a part of the neurologic exam). Some common examples of biomarkers are hemoglobin A1c for monitoring of diabetes or troponin for detection of a heart attack. Currently, there is an explosion of research attempting to find a biomarker for PD to allow for simpler diagnosis of PD. In order for a biomarker to be useful, it needs to have some key features which include:

So for the team that discovered that there are differences in the sebum of PD versus the sebum of people without PD, now the hard work starts in order to translate that into a lab test that can be widely used. The team has to confirm that the PD “signature” found in the sebum of people with PD holds up in large groups of people. They will then have to narrow down the set of sebum metabolites that best captures the difference between PD and non-PD. And since people without PD also have these substances in their sebum, but just at lower levels, the team will need to set the amounts of each substance that would clearly separate the PD and non-PD groups. With this information, they will then try to establish a method of detection that can be performed quickly, reproducibly and cheaply in commercial laboratory settings. So, there is a lot of work still to be done in order to determine if this very interesting possibility could in fact become a viable biomarker for PD.

Can a dog detect Parkinson’s?

A related news story is about the existence of programs which train dogs, well known to have much better senses of smell than humans, to smell PD. One such program, the first of its kind established in the US, is PADs (which stands for Parkinson’s Alert Dogs) for Parkinson’s and operates in the Pacific Northwest. This program was established directly as a result of Joy Milne’s story. The founders of the program hypothesized that if a human (albeit with an extraordinary sense of smell) can detect PD, then dogs could almost certainly be trained to do so. A program called Medical Detection Dogs based in the United Kingdom trains dogs to detect odors of a number of diseases and is working with the research program at the University of Manchester described above. Other endeavors to train dogs to detect the odor of PD exist as well.

Accounts from PADs for Parkinson’s and Medical Detection Dogs certainly support the idea that dogs can be trained to identify an odor in people who have been diagnosed with PD. For both these programs, the ultimate objective is not for trained dogs to diagnose PD by smelling bio-samples, but rather to identify the chemicals that the dogs are detecting so that an early diagnostic test can be developed.

The trained dogs are in service at the research stages. Similar to the work being done in the University of Manchester, PADs for Parkinson’s works closely with research scientists in an effort to identify the substances that the dogs are detecting. The trained dogs are then used to confirm if the substances isolated in the lab are in fact the ones that triggered the identification of PD to begin with.

As discussed above, in order for a biomarker to be useful, it must be able to detect disease earlier and more accurately than traditional diagnostic methods (e.g. neurologic exam). What we do not know is whether dogs can reliably be trained to identify PD earlier than the neurologic exam. Currently, the dogs are trained on samples from people who have an established diagnosis of PD, so we don’t know if dogs can detect an odor in patients who have not yet received a diagnosis of PD. To demonstrate that would likely require a clinical trial of individuals at high risk of PD. This cohort would be sorted by the dogs initially, into a group predicted to develop PD and a group predicted not to develop PD and then followed into the future to see whether they did or did not develop PD.

Another related issue is whether dogs can distinguish PD from other neurological conditions. Currently, this can be a clinical conundrum and it is unclear if odor detection would be helpful here.

More research is necessary – but it’s exciting and interesting to think that in the future, the odor of PD may turn into a biomarker for PD!

To support your local The Smell of Parkinson’s disease chapter, please click the button below: