Skip to content
APDA News What is a DaTscan and should I get one?

What role does DaTscan have in the diagnosis of Parkinson’s disease?

Many patients with Parkinson’s disease (PD) are frustrated and sometimes frankly suspicious about how it is diagnosed. As a neurologist, over the years I’ve heard comments like:

I understand how some patients and care partners can feel this way so I want to address this concern and discuss the role and limitations of a test that is available, known as DaTscan.

Parkinson’s is a clinical diagnosis

It turns out that the clinical features of PD are unique to PD and often very easy to see via a neurologic exam in a doctor’s office. Rest tremor for example, is seen in virtually no other illness. The skill is being able to distinguish a rest tremor from other tremors, which neurologists are trained to do.

However, some people with PD do not have a rest tremor, which can make the diagnosis trickier. Nevertheless, some elements of the standard in-office neurologic exam are very characteristic, such as

If there are enough of these features present during an exam, with or without a rest tremor, especially if coupled with a history of certain non-motor symptoms that typically appear before the movement symptoms of PD, such as constipation, loss of smell and REM behavior sleep disorder, the practitioner will feel sure of the diagnosis.

It may seem like a brief exam, but all of the above can be assessed quickly. It is important to note, that a person who displays some of these features on exam may be unaware of them, while a trained neurologist can easily identify them. The converse is also true – a person may be very concerned that his/her symptoms are consistent with PD, while a trained neurologist can easily reassure the person that that is not the case.

DaTscan: A test to help in the diagnosis of Parkinson’s

In 2011, the Food and Drug Administration (FDA) approved an imaging test to help diagnose PD. In this test, a radioactive tracer, Ioflupane 123I, also known as DaTscan, is injected into the blood, where it circulates around the body and makes its way into the brain. It attaches itself to the dopamine transporter, a molecule found on dopamine neurons. Several hours after the tracer has been injected, special imaging equipment scans the head to detect the presence of DaTscan. 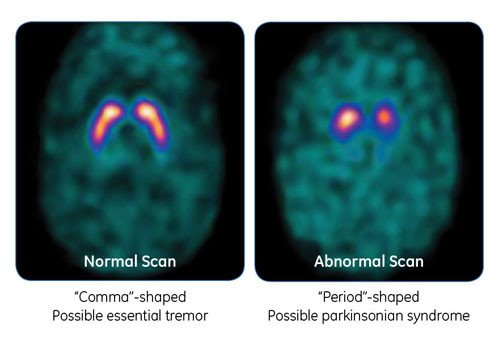 It is important to note that conventional MRI imaging will appear normal in PD and is therefore not helpful in confirming the diagnosis. Other atypical parkinsonian conditions, such as vascular parkinsonism however, can have abnormalities on MRI, so the test may be done to rule out other diagnoses.

Despite the DaTscan being available to help diagnose Parkinson’s, in most clinical situations, a DaTscan will not add information to what can be gleaned from the clinical exam. One study actually demonstrated that the accuracy of diagnosis in early PD was the same whether the diagnosis was reached using clinical exam or using DaTscan.

What are the pitfalls of DaTscan?

DaTscan will appear abnormal in any disease in which there is a loss of dopamine nerve endings in the striatum. Therefore, Parkinson-plus syndromes, discussed in a prior blog, such as Progressive supranuclear palsy (PSP), Corticobasal ganglionic degeneration (CBGD) and Multiple system atrophy (MSA) all typically demonstrate abnormal DaTscans. DaTscan therefore cannot be used to distinguish between these syndromes.

When is DaTscan helpful?

There are situations in which DaTscan can be very helpful in securing a diagnosis – when neurologic exam findings are not clear-cut. Although DaTscan cannot distinguish PSP, CBGD, and MSA from PD, studies suggest that it may be able to distinguish drug-induced parkinsonism and vascular parkinsonism from PD.

The FDA indication for DaTscan is for distinguishing between PD and essential tremor (ET). Usually it is quite straightforward for a neurologist to distinguish between the tremors of ET and the tremors of PD.  PD tremors occur at rest and are accompanied by slowness and stiffness of the limb, whereas ET tremors occur with action and are not accompanied by slowness and stiffness of the limb. However, some people may have mixed tremor features making the diagnosis more difficult. In those cases, a DaTscan can be very useful.

What are the limitations of the test?

Currently, DaTscan that is in clinical use is not quantitative, which means that the test is not designed to determine how impaired the dopamine system is – just whether it is or not. This means that the test is not used to tell you whether the disease has progressed over time and is not used to follow a patient’s disease. It also is not used currently as a clinical test to screen for the disease before motor symptoms are evident. Because of these limitations, the search continues for additional measurable indicators, known as biomarkers, to help diagnosis and manage PD.

To support your local What is a DaTscan and should I get one? chapter, please click the button below: