A tremor is an involuntary quivering movement affecting 80% of people with Parkinson’s.

What is a tremor?

However, tremor is annoying. It also attracts attention, so that people tend to keep their bad hand in a pocket, or to sit on it during conferences. Since it disappears with movement, it turns out that tremor does not interfere severely with activities of daily living.

Introducing an easier way to track your symptoms and manage your care.

Don’t want to download the app? Use the non-mobile version here.

What makes a Parkinson’s tremor different?

The tremor that occurs in Parkinson’s disease is different than almost all other tremors because it is a “resting tremor,” present primarily at rest. It goes away with movement, but often returns when the limb (usually a hand or the fingers) is held in one position, as in holding a spoon or fork to the mouth, which is why those with Parkinson’s are known to spill things. Parkinson’s disease tremor may affect almost any part of the body, but most commonly involves the fingers, followed next most commonly by the hands, jaw, and feet — in that order.

Like most symptoms of Parkinson’s disease, it is usually asymmetric. It starts generally on one side, which remains the more affected side forever. Having a tremor on one side does not mean that the other side will begin to shake as well. Many people have tremor on only one side throughout their illness. 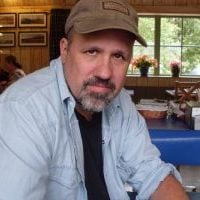 “He asked me if I had any concerns about my health, and I told him I was worried about my cholesterol, and oh, by the way, I’ve noticed in the past three or four months I occasionally have an involuntary twitch with my index and middle finger on my left hand.”

The “pill rolling” tremor that is often described in medical texts refers to the tremors of the fingers, usually the thumb plus the other fingers, that makes it look as if the person is rolling a pill in the fingers. This is most often the part of the body where tremors will begin.

Jaw tremor is also common in Parkinson’s, whereas head tremor is not. The jaw tremor looks very much like shivering, although usually slower. It goes away with movement, so it is not present while chewing. It is extremely annoying when it is severe enough to cause the teeth to click together. For people with dentures, it may keep the dentures from staying in place, in addition to attracting attention because of the clicking sounds. Chewing gum stops the tremor.

Many, if not most people, may have a leg tremor if they rest their leg in particular positions with the heel off the ground a little bit. This is not a Parkinson’s disease tremor.

A foot tremor due to Parkinson’s is—like the tremors elsewhere—a resting tremor, so it is most evident when the feet are dangling or when the person is lying down. It always disappears when the person is standing (those who shake when they stand up have a different problem), and does not interfere with walking. The tremor usually involves the feet, but the thighs may also be involved so that the whole leg moves.

It appears that those with Parkinson’s disease whose major problem is tremor (relative to slowness, stiffness or walking problems) tend to have a much more benign course than others. They progress more slowly and probably live longer.

It also appears to be the case that tremor is the only symptom of Parkinson’s disease that may improve on its own — some who had severe tremors have seen them virtually disappear over the period of a decade. Tremors also rarely continue to worsen beyond a certain point — at some point the tremor will plateau. Of course, no one can predict when that will be or how severe it will be at that point.

Tremor can be hard to treat with medication

If not warned about this, people will often think a drug isn’t working even though they dress more easily and quickly, get up from chairs that they couldn’t get up from before, get out of cars that were a major hassle before, and do many chores a lot more easily on the medication than before starting it. Knowing that tremor may not respond as well as the other symptoms of Parkinson’s Disease is extremely helpful for the person with Parkinson’s and their family.

When tremor is severe, or disabling in some way, and does not respond to the more commonly used Parkinson’s disease medications, other drugs that are not usually used as “first line” may be an option:

What if medication fails?

Deep brain stimulation surgery is the single most reliable and effective treatment for Parkinson’s disease tremor when medications fail. Treatment is successful in about 90% of cases, and usually makes the tremor resolve completely or almost completely. It is not experimental and is approved by all insurance companies.

To support your local Tremor in Parkinson's chapter, please click the button below: