New research has expanded our understanding of the potential role of inflammation in the progression of Parkinson’s disease.

The immune system is responsible for protecting the body from foreign substances such as infections or toxins. Inflammation is the immune system’s response when a foreign substance is detected. This response consists of a cascade of cellular events that produces a hostile environment for the intruders, allowing the body to defend itself. The human body needs inflammation when it is under attack, but at times the cascade that is set in motion can causes damage to healthy tissue. This is the general understanding of what goes wrong in autoimmune diseases such as Lupus or rheumatoid arthritis. Medications that suppress the immune system are therefore used to treat this type of disease.

The brain and the body

For more than thirty years it has been understood that inflammatory changes occur in the brains of patients with PD, but only in the last few years has inflammation been viewed as part of the cause of the progressive nature of the disease and not just a result of the disease. What this means, is that the disease may start because of abnormal accumulation of the protein alpha-synuclein into clumps known as Lewy bodies, but this abnormal accumulation may be triggering the body’s inflammatory response, which then causes the damage and further disease progression.

Dr. David Standaert, the Chairman of APDA’s Scientific Advisory Board, and director of the APDA Center for Advanced Research at the University of Alabama, is an expert on inflammation and Parkinson’s disease and has summarized for the scientific community how alpha-synuclein triggers inflammation in PD.

Why is it important to understand inflammation in PD?

What is exciting about this new understanding is that it opens up a whole array of potential treatment options.

Research on the link between inflammation and PD

On May 31, 2018, an article was published in the Annals of Clinical and Translational Neurology  which supports this possible path to treatment of PD. Dr. Brad Racette, the lead author on the article, is a researcher at Washington University School of Medicine, which is an APDA Center for Advanced Research. His work is directly supported by the APDA Greater St. Louis Chapter. He and his team analyzed Medicare data and selected all the newly-diagnosed patients in the year 2009 and a randomly selected group of controls without PD. They then identified whether the patients in the two groups were ever prescribed any of seven classes of immunosuppressant drugs, medications that decrease the ability of the body to mount the immune response. Prescriptions up to a year prior to diagnosis were analyzed.

What did the study find?

People who were prescribed two of the classes of immunosuppressant medications had lower risks of developing PD. These two classes were corticosteroids and inosine monophosphate dehydrogenase (IMDH) inhibitors (a class which includes azathioprine, leflunomide, and mycophenolate).
The authors highlight a number of limitations of the study (summarized below) that need to be considered, and that for the moment at least, will keep clinicians from prescribing these medications to everyone who has PD.

Despite these caveats, the results are intriguing and certainly continue to highlight the potential role that inflammation plays in the development of PD.

Inflammation and the gut in PD 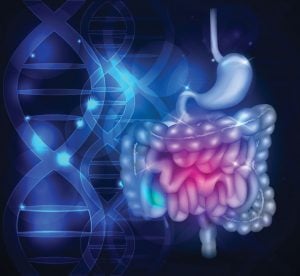 The microbiome as source of inflammation

The human gut harbors trillions of micro-organisms referred to collectively as the microbiome. Current understanding is that the microbiome provides a number of benefits to the human including: help with digestion of food, help with warding off harmful microorganisms, and creation of needed vitamins. The microbiome varies from person to person and is influenced by many factors including diet. Although no two microbiomes are identical, people with certain diseases may share similarities in their microbiomes. Along these lines, the microbiome in PD patients appears to be somewhat different as compared to non-PD patients. This observation has led to the theory that the changes in the bacterial composition in the gut of people with PD may trigger increased inflammation in the gut which fuels the disease.

As stated above, increased inflammation in the gut may contribute to disease development in PD. This may help explain why patients with Inflammatory bowel disease (IBD), a condition in which over-activation of the immune system causes gut dysfunction, have an increased risk of PD. Recent research has demonstrated that certain genetic variants of Leucine rich repeat kinase 2 (LRRK2), a risk factor for PD, is also a risk factor for IBD. Another recent study, which is similar to Dr. Racette’s study, showed that taking medications that decrease the immune response to treat IBD, lowers the risk of developing PD.

To support your local The Role of Inflammation in Parkinson’s disease chapter, please click the button below: