Skip to content
APDA Parkinson's Disease Symptoms Listen to your gut – what is the gastrointestinal tract telling us about Parkinson’s disease?

The Gastrointestinal Tract and Parkinson’s

As promised in a previous blog, I now return to the topic of the gastrointestinal (GI) tract and Parkinson’s disease (PD). As most of you know, GI symptoms are very common in PD. We will discuss what those symptoms are, why they occur, and the current research that links what is happening in the gut to theories as to why PD occurs at all. Many of you have suggested gut-related topics for this blog including a discussion of symptoms such as bloating and constipation, and a discussion of the use of probiotics in PD. I will address these issues as well. Submit additional topics that you would like to read about here.

GI symptoms can be among the most bothersome of the non-motor symptoms of PD. Constipation is the most common of these symptoms, affecting 80-90% of people with PD. APDA has a helpful brochure with practical tips to prevent and treat constipation in PD.

GI pathology in Parkinson’s disease however, can involve the entire GI tract and includes sialorrhea (excess saliva) and dysphagia (swallowing dysfunction). In addition, delayed gastric emptying, in which the digestive contents are held up in the stomach and do not move normally into the small intestine, can cause sensations of nausea and bloating.

The gut has its own nervous system

The biological underpinnings of gut dysfunction in PD is twofold. First of all, alpha-synuclein abnormally accumulates into Lewy bodies in a cluster of neurons in the lower brainstem that controls gut function, called the dorsal motor nucleus of the vagus. In addition, alpha-synuclein accumulates in Lewy body-like structures in the nerves that line the gut, collectively called the enteric nervous system (ENS). Lewy bodies are most abundant in the nerves of the salivary gland and esophagus and decrease in abundance as the GI tract moves away from the brain – to the stomach, small intestine, large intestine and rectum. The presence of Lewy bodies in the gut can occur many years before the onset of the motor symptoms of Parkinson’s disease and can help explain why constipation is often such an early non-motor symptom of PD.

The gut as a biomarker

The discovery that there is Lewy body pathology throughout the gut led to research aimed at inventing a simple test to diagnose PD by biopsying a section of the gut. Studies have been conducted to look at Lewy body pathology in the salivary glands, stomach, small intestine, large intestine and rectum. Different labs do not show consistent results, likely due to differences in technique. In general, GI biopsies to diagnose PD do not yet have high enough sensitivity (ability to correctly identify those with PD) and specificity (ability to correctly identify those without PD) to be a clinically reliable tool. There is more work to be done before we can identify a dependable test that can be widely used for this purpose.

Entry to the brain

With the early presence of Lewy body pathology in the gut, the hypothesis developed that Lewy body pathology traveled from the gut to the brain, via the nerve that connects the two – the vagus nerve. This idea was supported by a study in which patients who had vagotomies – a surgery in which the vagus nerve was cut, performed as a treatment for peptic ulcer disease, had lower rates of PD than the general population.

The Braak hypothesis, first outlined in this famous paper, suggests that over time, Lewy body pathology travels within the brain. The theory proposes that after the Lewy bodies are present in the lower brainstem, they make their way up the brainstem until they reach the midbrain. Lewy bodies in the midbrain contribute to rest tremor, slowness and stiffness that are the motor hallmarks of PD.

How do Lewy bodies propagate?

But what is the mechanism by which Lewy body pathology “travels” from the gut to lower brainstem via the vagus nerve, and then up the brainstem? One popular theory is that alpha-synuclein can misfold, or twist into the wrong three dimensional shape. Once in that wrong shape, one molecule of alpha-synuclein can cause a neighboring molecule to bend into that shape as well.

Eventually, a clump of abnormal alpha-synuclein forms, which is a Lewy body. Then those molecules can further induce other molecules into the wrong shape and spread the abnormality to other areas of the nervous system.

This begs the question: what is the initiating factor of this whole process? One theory is that a foreign substance that enters the body through the gut induces the first alpha synuclein molecule to take the wrong form.

Medication Side Effects and the Gut

The interactions between PD medication ingestion and the gut can play a major role in motor fluctuations – the phenomenon in which a patient’s response to Levodopa varies widely during the day. A recent APDA webinar helps to explain this interplay.

Levodopa crosses the wall of the small intestine via a molecule in the intestinal wall that transports amino acids, the building blocks of protein. When dietary protein is also present in the small intestine, then there are fewer transporters available for Levodopa to use. A patient may therefore experience the “protein effect”, in which he or she feels that medication is not as effective after a high-protein meal. Sources of dietary protein include: beef, chicken, pork, fish, eggs, nuts and dairy.

Like all elements of PD, the protein effect is highly variable. Some people do not experience it at all. Others are extremely sensitive to protein’s effect on medication absorption. It typically becomes more of an issue as PD progresses. If a person discovers that he or she does experience the protein effect, there are two potential strategies to try. One is to refrain from eating protein during the day and instead, eat protein at night when medication effect is less critical. The second is to distribute protein intake evenly throughout the day so that medication absorption in turn is even throughout the day.

Small intestinal bacterial overgrowth (SIBO) is a condition in which there is excessive bacteria in the small intestine (defined as 100-1,000 times the normal amount of bacteria that are present in the small intestine) and can cause symptoms such as abdominal pain, bloating, chronic diarrhea and weight loss. It is also linked to worsened motor fluctuations in PD and can be diagnosed by a glucose hydrogen breath test.

If motor fluctuations are hard to manage, consider talking with your neurologist about a referral to a gastroenterologist for testing for these conditions.

Inflammation of the gut in Parkinson’s disease

In a previous blog we explored the possibility that inflammation in the gut can contribute to disease development in PD. Patients with inflammatory bowel disease (such as Crohn’s disease and 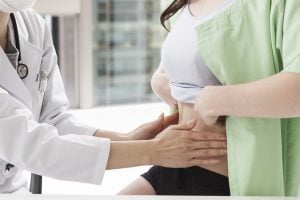 ulcerative colitis) have an increased risk of PD. We also touched on the concept of the microbiome, the trillions of micro-organisms that live in the human gut (of which Helicobacter pylori is a well-understood example). The microbiome may be altered in different disease states, including PD, and may trigger increased inflammation in the gut which fuels the disease.

With the awareness that the microbiome may play a role in PD, came the idea that altering the microbiome may help with PD symptoms. The ingestion of probiotics, or the introduction of “good” bacteria in the gut, has been studied to help PD symptoms and may improve constipation in people with PD.

Another idea that has been considered is fecal transplantation, a technique in which fecal matter from a healthy person is delivered to the gut of a person with PD, with the goal of restoring a more normal microbiome. More research is needed to verify whether this practice will prove to be useful for patients with PD.

All in all, the gut is highly relevant to our understanding of PD and may be the key to unlocking some of its mysteries.

To support your local Listen to your gut – what is the gastrointestinal tract telling us about Parkinson’s disease? chapter, please click the button below: