The pipeline for Parkinson’s disease (PD) medications is extremely crowded these days, with multiple medications at various stages of research and development. Currently most of the approved medications for PD address the motor symptoms of PD – tremor, slowness, stiffness, and walking difficulties. Medications are also available to help people overcome OFF time or improve dyskinesias. 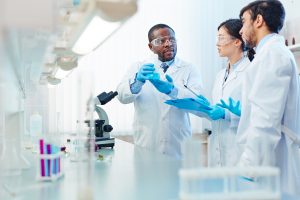 One of the major unmet needs in PD treatment is therapies for non-motor symptoms  (such as cognitive issues, psychosis, constipation and others) as these can have a significant effect on daily quality of life for both the person living with PD and their care partner. Therefore, it is particularly exciting to witness compounds being studied in clinical trials for these symptoms.

Many of the currently active clinical trials for non-motor symptoms involve studying medications that are already approved for other diseases or uses, in hopes of determining if the medication also works for a particular symptom in the context of PD. Although these trials are crucial, this blog will focus on clinical trials of newly developed compounds aimed to specifically treat non-motor symptoms in PD.

If you are interested in getting involved in a clinical trial, Clinicaltrials.gov is a website that you should know about. It is a database of all clinical trials for all diseases worldwide. When a clinical trial is registered with the site, it is assigned a unique number called the National Clinical Trial (NCT) number. I will be referring to these numbers as I outline the clinical trials that are being conducted for newly developed compounds for non-motor symptoms of Parkinson’s disease so that you can learn more about them if you’re interested in participating in the trial.

Treatment of cognitive difficulties in PD is a major unmet need. There is only one medication approved for PD dementia, called rivastigmine, and its effects are mild. Research efforts are focused on trying to develop new therapies to improve this symptom.

This molecule has previously been tested in Phase I clinical trials, in both healthy people and people with Huntington’s disease (HD). Healthy people were given a molecule that blocks the NMDA receptor before administration of SAGE-718 or placebo. Those receiving SAGE-718 showed a statistically significant improvement of measures of working memory and complex problem solving. The molecule was also tested in six people with HD, a neurodegenerative condition that often results in dementia and although is very distinct from PD, does share some of its features. This study was open label (no placebo group). Participants showed improvements in executive function – the cognitive abilities that allow for planning, organizing, and sequencing — that are particularly affected in HD and PD.

The safety profile and optimal dosage has previously been studied in a Phase I trial of healthy volunteers. NYX-458 has also been shown to reverse cognitive deficits in a primate model of PD.

LY3154207 has also been shown to increase wakefulness in a Phase 1 trial of sleep deprived healthy volunteers, which may indicate that it could show promise for fatigue, another common PD non-motor symptom.

Psychosis is a major issue for many people with PD. Although there are medications used to treat psychosis for people with PD, side effects may be problematic for some, and sometimes the available medications do not offer enough improvement.

Constipation can be an early non-motor symptom for people with PD and can continue to have a major impact on quality of life throughout the disease course.

To support your local Therapies for non-motor symptoms of Parkinson's disease in clinical trials chapter, please click the button below: