Skip to content
APDA Parkinson's Research Is a vaccine for Parkinson’s disease possible?

As the world awaits an effective vaccine for SARS-CoV2 (the virus that causes COVID-19), vaccines and vaccination are at the front and center of the news and in our minds.

A vaccine is a substance that is introduced into the body in order to stimulate the immune system to provide protection against a particular disease.

Did you know that many pharmaceutical companies are working on vaccinations as a treatment for Parkinson’s disease (PD)?  It is important to note that while a vaccine is not imminent, each clinical trial and study that is underway is teaching us something new and important that will hopefully get us closer to a successful outcome. Even the projects that fail offer us 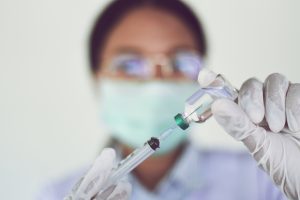 substantial learnings that can be applied to future research efforts in this area.

People with PD have protein deposits in their brain (Lewy bodies) which are composed of accumulated α-synuclein. Preventing alpha-synuclein aggregation and dissolving pre-formed aggregates (or clumps) may be an effective strategy for treating PD.

Two related strategies have been devised in order to protect against this accumulation:

The theory is that in both scenarios, the antibodies to alpha-synuclein (either introduced directly or created by the body) would bind to clumped alpha-synuclein and aid in their removal. Let’s look at these scenarios in more depth.

There are multiple research efforts underway to create and test antibodies against alpha-synuclein.

This antibody was studied in a Phase 2 trial called PASADENA, with 316 participants, all with newly diagnosed PD who had mild symptoms and were not on any medication for PD. The trial was double-blinded and placebo controlled which means some people received the drug and some did not, and neither the participants nor the researchers knew which group anyone was in.

This trial has been completed and the data has been analyzed. As happens sometimes in research, it unfortunately did not meet its primary endpoint (the original goal which was stated at the outset as the definition of success of the trial). The primary end point for the trial was an improvement over the course of the year in the total Movement Disorder Society-United Parkinson’s Disease Rating Scale (MDS-UPDRS). This scale has four parts. The first two are filled in by the patient or care partner and assess the motor and non-motor symptoms of PD from the patient’s perspective. The third part is a scale that reflects the motor examination performed by the clinician during the office visit. Part four captures historical and objective information about motor fluctuations and dyskinesias. The trial did not show any difference in the total MDS-UPDRS after one year between those receiving the antibody and those who did not.

It did, however, succeed in meeting some of its secondary endpoints (outcomes that were also determined at the start of the trial, but thought to be of lesser significance than the primary endpoint).  There was a statistically significant difference between those receiving the antibody and those receiving placebo in the MDS-UPDRS Part III, or the subsection of the scale that measures the clinician’s rating score of the neurologic exam, with the group that received the antibodies faring better.

In addition, a subset of people in the trial underwent brain imaging that measured cerebral blood flow. Those receiving the antibody showed less of a decline over the year in the blood flow to an area of the brain called the putamen, which is affected in PD. This potentially means that receiving the antibody correlated with less damage to areas of the brain normally damaged in PD. DaTscan imaging, which helps to visualize the dopamine transporter in the brain and can assist in the diagnosis of PD and related syndromes, however, was not different between the two groups.

There is another result of the trial that is worth mentioning.  As mentioned above, none of the participants were on medication for PD at the start of the trial. Participants however, were allowed to start medication over the course of the year that the trial was ongoing if they required it. There was no difference in whether or not medication was required between those receiving the antibody and those receiving placebo, which could indicate that progression of the disease in the two groups was similar.

Currently, this trial continues into a second part, in which all 316 participants receive the active antibody and are being followed for another year. No additional participants are being recruited to this part of the trial.

Another alpha-synuclein antibody, BIIB054, is also being studied in clinical trials. Phase 1 data which investigated the molecule in a small group of healthy controls and people with PD, showed that it was safe and well-tolerated, and a Phase 2 trial entitled SPARK is now underway (NCT03318523).

These molecules induce the body to produce its own antibodies against alpha-synuclein.

Two molecules, AFFITOPE PD01A and AFFITOPE PD03A were shown in separate Phase 1 studies that repeated administration of the vaccines were safe and well-tolerated and resulted in the production of antibodies to alpha-synuclein. Neither of these molecules are currently being studied in an active clinical trial. Another molecule which also aims to induce the body to produce antibodies against alpha-synuclein, UB312, is currently being studied in a Phase 1 trial (NCT04075318).

Vaccines and Parkinson Plus syndromes

Parkinson Plus syndromes are a group of neurodegenerative conditions in which Parkinson symptoms are present along with other signs of neurologic impairment.

There are Parkinson Plus syndromes that are also caused by abnormal accumulation of alpha-synuclein, namely Multiple System Atrophy (MSA) and Diffuse Lewy Body dementia.  If the strategy of vaccination in PD is effective, then theoretically, the same strategy could be employed in these related conditions.

PD01A and PD03A were tested in Phase 1 trials for people with early MSA and shown to be safe, well-tolerated, and capable of producing an immune reaction. None of the other antibody strategies described above have been tested in MSA.

Some Parkinson Plus syndromes, including Progressive Supranuclear Palsy (PSP) and Corticobasal Degeneration (CBD) are caused by abnormal accumulation of a different protein, the Tau protein. This protein also accumulates in Alzheimer’s disease, which is much more common than PSP or CBD and therefore generates a larger research effort. A whole host of passive and active immunity strategies against Tau are being developed for Alzheimer’s disease, and some of these strategies were tested in PSP or CBD as well. Unfortunately, these strategies have not met with success in these conditions.

Gosuranemab was studied in a Phase I trial for PSP. The study concluded that it was safe and that it lowered levels of Tau in the cerebrospinal fluid. A Phase 2 study named PASSPORT studied this molecule in 490 people with PSP. Analysis of the incoming results however, showed that the trial did not reach its pre-determined endpoint of change on the PSP rating scale and the trial was closed early. A smaller trial was underway when these results came in, studying the effects of this molecule on four less common tau-related neurodegenerative conditions (CBD, frontotemporal lobar degeneration, traumatic encephalopathy, and non-fluent primary progressive aphasia). Because of the results of the PASSPORT trial, this trial was stopped early as well.

A second molecule, ABBV-8E12 had similar results, with a Phase I trial that showed it to be safe, but a Phase 2 trial in PSP that was stopped early because interim results were not positive.

Both of these molecules continue to be under investigation for their use in Alzheimer’s disease.

To support your local Is a vaccine for Parkinson’s disease possible? chapter, please click the button below: