A well-established but poorly understood clinical feature of Parkinson’s disease (PD) is difficulty with posture. Most people with PD exhibit some degree of stooped posture. A smaller group of people with PD have more pronounced problems with posture. They might walk with an extreme bend at the neck, shoulders, or waist. They might walk with a prominent tilt of the trunk. This article will explore these troubling problems, discuss why they might happen in PD, and although there’s no easy or clear fix, offer some potential solutions.

As always, please bring any concerns or changes, including posture issues, to the attention of your healthcare team. The sooner you address them, the sooner you can work together to find answers and hopefully mitigate the issues you’re experiencing.

People with PD characteristically walk and even sit in a stooped posture, with their shoulders hunched forward. This tends to tip a person’s center of gravity forward and can contribute to falls. A 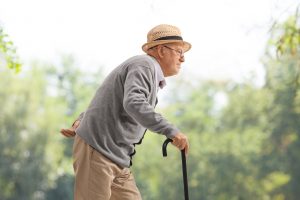 pronounced manifestation of this may result in a festinating gait in which a person takes small, rapid steps, which can resemble running, in an attempt to “catch up” with their center of gravity which is propelled forward due to stooped posture.

Counteracting the tendency of the person with Parkinson’s to sit and walk with a stooped posture is often a constant struggle. The brain in someone with PD directs the body to assume a small amount of space and to move in small ways. To offset this, physical therapy techniques can be employed which emphasize a larger stance, bigger movements, and an erect posture. These techniques can help stabilize the gait and remind the brain to “undo” the stoop. The Lee Silverman Voice Treatment (LSVT) BIG physical therapy techniques, which we discussed in a previous blog, focus on these principles.

Approximately 5-10% of people with PD have a more pronounced problem with their posture. One potential difficulty is a pronounced forward flexion of their head, called dropped head syndrome (DHS). Another, is a pronounced flexion of their entire trunk, called camptocormia or bent spine syndrome (often defined as a greater than 45-degree flexion of the spine). These two conditions have many causes besides PD including other neurodegenerative diseases such as the Parkinson plus syndrome, multiple system atrophy (MSA), amyotrophic lateral sclerosis (ALS), and muscle or nerve diseases such as chronic inflammatory demyelinating polyneuropathy (CIDP).

Typically, in dropped head syndrome and camptocormia, the forward flexion is present with sitting and increases with walking. When lying down on the back however, the neck and trunk can mostly or completely straighten out. This distinguishes it from a fixed posture of the neck or back called kyphosis or kyphoscoliosis, which does not straighten out when lying on the back. Kyphosis is common as people age and is not related to PD. It can be caused by osteoporosis, leading to compression fractures of the spine, arthritic changes in the spine, and degenerative disc disease. Both kyphosis and camptocormia can co-exist in one person, which complicates the diagnosis. Both are also more common in women than men.

Regardless of the cause, having a flexed trunk and/or head can be very problematic, leading to significant disability including difficulty eating, swallowing, and socializing. The flexion can limit looking upwards and can contribute to poor control of saliva as well. It can make standing up and walking more difficult and can also cause breathing problems by restricting the amount the lungs can expand. Pain is often a feature as well.

Another common postural abnormality in PD is lateral bending of the trunk (often defined as a greater than 10-15 degree bend) with a tendency to lean to one side, known as the Pisa syndrome. Despite the fact that most people have symptoms of PD that are more prominent on one side of the body, PD laterality has not been shown to correlate with the laterality of Pisa syndrome. A person with Pisa syndrome may lean toward or away from their more parkinsonian side.

It has been suggested that dysfunction of the vestibular system (the part of the nervous system, based in the inner ear that contributes to balance control), as well as dysfunction of the proprioceptive system (the part of the nervous system that senses the body’s position in space), may contribute to lateral leaning seen in PD. It must be noted that it is possible to see both lateral flexion and forward flexion of the trunk in the same person. Often, the lateral lean develops slowly, to the point that the person may not be aware that the trunk is not straight.

Why do truncal abnormalities occur in PD?

The reason that these syndromes occur in PD are not clear. There are four potential causes, and likely each of these play a role in some of the cases that are seen:

Various treatment options have been tried to correct these abnormal postures in PD. However, the treatments reported in the literature are typically of only small numbers of patients and results are mixed. The following show some promise in helping those with postural abnormalities in PD:

As with many issues, it makes sense to start addressing abnormal posture when it is mild. Physical therapy directed at correcting a mildly abnormal posture, for example, is more likely to reap benefits than when the problem is more severe.

Despite best efforts however, postural problems may worsen and may not be helped sufficiently by the treatment options listed here. More research needs to be done to determine the best way to improve these troubling symptoms.

To support your local Posture problems in Parkinson’s Disease chapter, please click the button below: