Today we continue Parkinson’s Disease: Planning for the What-Ifs, a special series of posts to address both motor and non-motor issues of people with advanced Parkinson’s disease (PD). We are defining advanced PD as those who are no longer independent in their activities of daily living and require help for their self-care such as eating, bathing, dressing and toileting. Remember, PD is a very variable condition and many never reach the advanced stages. Additional background and the full introduction to the series is still available if you missed it.

In previous blogs, we’ve addressed the mental health issues in relation to advanced PD which include: cognitive decline/dementia, depression, anxiety, apathy, psychosis, mania and behavioral problems. We also addressed other topics of advanced PD including falls, extreme immobility, and drooling and swallowing difficulties and urinary and gastro-intestinal issues.

Today we will focus on sleep issues in advanced PD.

There are many sleep disorders that are associated with PD and that can be problematic throughout the disease course. These include: 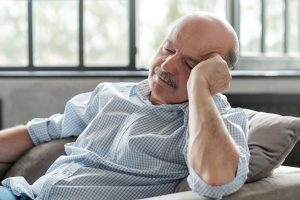 PD medications can interfere with sleep by causing:

Finally, there are motor and non-motor symptoms of PD that interfere with sleep. These include:

In addition to all the sleep issues listed above, people with PD often have fatigue, a complicated non-motor symptom of PD, characterized by a general lack of energy, which is sometimes present even in the face of what seems like intact and restful sleep. This can be due to many causes including PD medications, but can also be independent of medication use.

All of these sleep issues can continue to be problematic for the person with advanced PD. In addition, an extreme form of fatigue, or excessive daytime sleepiness (EDS), can develop. EDS is defined as an inability to maintain wakefulness during the waking day which leads to lapses into drowsiness or sleep. Care partners often report that the person with PD will sleep for large parts of the day and care partners are not sure whether or how to intervene.

Treatment for EDS:  a two-pronged approach:

The goal is to improve nighttime sleep without using medications specifically designed to induce sleep. There are many reasons to avoid sleep medications. First of all, these can increase confusion and imbalance. In addition, their effects may last into the daytime, thereby worsening daytime sleepiness.

There are a number of strategies that can be tried to improve nighttime sleep:

Strategies that improve wakefulness during the day

There are no FDA approved medications for EDS in the context of PD. However, clinicians sometimes prescribe medication off-label for EDS.  These include modafinil, methylphenidate, and caffeine. Istradefylline is a medication approved to treat motor symptoms of PD. A small trial demonstrated its potential improvement of EDS as well. Talk with your physician about the possibility of using a medication to maintain wakefulness during the day.

To support your local Planning for the What-Ifs: Sleep disorders in Advanced Parkinson’s Disease chapter, please click the button below: