Many people think of Parkinson’s disease (PD) as the “tremor disease”, so much so, that when a tremor is noticed, the first diagnosis people typically think of is PD. Although about 25% of people with PD do not have tremor, 75% of them do, so tremor is certainly a very visible and characteristic symptom of PD.

Rest vs. postural vs. action tremor

A tremor is defined as movement of a body part that oscillates rhythmically around a midpoint.

When deciding whether a tremor is consistent with a diagnosis of PD, the most important feature is the position of the body part in which the tremor occurs. There are three main positions to consider.

A rest tremor occurs when a body part is not being held against gravity and is not moving. Rest tremors occur for example, when the hands are resting in the lap, such as when watching television, or when the arms are dangling at the side when walking.

A postural tremor occurs when a body part is held against gravity. Postural tremors occur for example, when the arms are extended, such as when holding a tray.

A kinetic tremor occurs when a body part is moving. Kinetic tremors occur for example, when the arm is moving toward the mouth to eat.

Parkinson’s tremors classically occur at two characteristic times. One is at rest. The other is when the limb is moved and then held against gravity. The tremor tends to stop during the movement and then resume in the new posture. This is referred to as a re-emergent tremor.

Although there are many diseases that cause tremor in general, there are very few that cause rest tremor and re-emergent tremor. So if a person can accurately distinguish between these entities, this can be an important clue in diagnosing PD. However, to the untrained eye, it can be very difficult to distinguish between these tremors. Therefore, if you have a tremor, it is best to get checked out by a neurologist.

A PD tremor typically has a frequency of about 3-6 Hz, which means that the body part moves back and forth about 3-6 times a second. This can be variable however, with younger people tending to have faster tremors. Therefore, the frequency of the tremor is not characteristic enough to use as a means of diagnosing a PD tremor.

A PD tremor most commonly affects the fingers or hand, but can also affect the legs and jaw. Almost universally, the tremor of 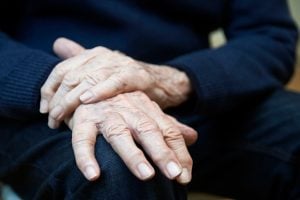 PD is asymmetric, meaning that it is different on each side of the body. Typically, the tremor starts on one side and even if, as the disease progresses, it begins to affect the other side, a difference between the two sides of the body tends to remain.

The term “pill rolling” is often used in reference to a PD tremor. This refers to a repetitive circular motion of the thumb against the other fingers. Although this is a pattern that is sometimes seen, there are many other characteristic rest tremors of PD, such as bending and unbending at the wrist or rotation at the wrist.

The company it keeps

Perhaps most important of all in deciding whether a tremor is consistent with PD or another disorder is determining whether other symptoms of PD are present, in addition to the tremor. The symptoms that can occur early in in the disease and provide evidence that the tremor is part of PD include:

Other causes of tremor besides Parkinson’s disease

There are numerous other medical conditions that can cause postural or kinetic tremor, and these are considered during evaluation of a tremor:

Every person has an innate tremor that is typically very subtle, but will emerge when hungry, angry, nervous or otherwise activated. A common example of this is a tremor that becomes prominent when speaking in public. This tremor is typically fast, ranging from 5-10 Hz. Some people’s innate tremor is more prominent than others and they may notice it and be worried about it. This type of tremor however, is not of concern.

Essential tremor (ET) is very common, affecting about 4 percent of the population in those aged 65 and older. (This is about 4 times more common than PD). ET is characterized by a kinetic tremor which usually involves the arms, but can involve the legs, head or voice.

People with essential tremor have particular difficulties with tasks that require making accurate movements. This includes bringing food to the mouth with a utensil – particularly soup which can easily slosh off the spoon. People with ET find that using two hands to do tasks makes things easier, so they will typically use two hands to bring a mug to the mouth or to use a screwdriver.

The tremor can range in severity, from mild to extremely severe. The tremor can occur at any age and cases in children have been reported. However, the prevalence markedly increases with age.  In about 50% of people, there is a clear family history of tremor. Despite the fact that so many people with ET have a family history of the condition, the search for genes that cause ET has been slow.

Treatments include use of medications such as beta-blockers and primidone. Deep brain stimulation (DBS) is a surgical treatment in which thin electrodes introduce electric impulses in specific parts of the brain. DBS of the thalamus is very effective for ET and is used for severe cases. (DBS is also a treatment for PD, with the electrodes inserted in a different location in the brain) Focused ultrasound, a technology in which beams of ultrasound waves are focused on a particular part of the brain, thereby concentrating enough energy to create a small lesion, is the newest FDA-approved treatment for ET.

A wide variety of medications can cause tremor. Drug-induced tremors typically are symmetric or equal on both sides of the body. The medications that can cause tremor include, but are not limited to, lithium, valproic acid, amiodarone, beta-adrenergic agonists, and selective serotonin reuptake inhibitors (SSRIs). Be attentive to whether a tremor starts after any new medication is started. If it does, discuss this with your doctor.

Certain metabolic disturbances such as hyperthyroidism (or excessive production of thyroid hormone) can lead to a tremor. Typically, this condition can be distinguished from a pure tremor disorder by symptoms that accompany the tremor. These can include weight loss, palpitations, excessive sweating, nervousness, and a tendency to be overheated.  However, in a person with a new tremor, checking levels of thyroid hormone makes sense. Hypoglycemia or low glucose can similarly cause tremor. The tremor of hypoglycemia is also typically accompanied by other symptoms including sweating, dizziness, hunger and irritability.

Tremor can be a sign of a neuropathy, a disorder of the peripheral nerves, or the nerves that bring messages from the brain and spinal cord to rest of the body. In particular, neuropathies caused by autoimmune syndromes such as chronic inflammatory demyelinating polyneuropathy (CIDP) can have tremor as a component. Tremor in this situation is not an isolated symptom but is evaluated in the context of other symptoms of CIDP which can include weakness, numbness and tingling. An evaluation by a neurologist can determine if neuropathic tremor is a diagnostic consideration.

Orthostatic tremor is a relatively uncommon tremor of the legs which occurs primarily when a person is standing but not when sitting or walking. The tremor is very rapid (12-18 Hz) and a person typically complains of shaking legs and a fear of falling when standing still. The shaking causes the affected person to constantly try to sit or walk instead of stand.

A rubral tremor is a relatively slow tremor which is present both at rest and action. It is caused by a lesion in specific areas deep in the brain. The lesion could be a bleed, a stroke, or a tumor.  The tremor usually emerges during recovery from a major neurologic event and does not present simply as a tremor.

A cerebellar tremor manifests as a specific type of kinetic tremor known as an intention tremor, one that worsens when trying to accurately reach a target. There may be minimal tremor on the way to the target, but it increases substantially when approaching and trying to accurately hit the target. A cerebellar tremor is caused by a problem in the cerebellum, the part of the brain that controls accuracy of movement. There are a whole host of causes of cerebellar problems including specific genetic diseases, as well as brain lesions such as bleeds, strokes or tumors.

Atypical parkinsonian syndromes such as Multiple System Atrophy (MSA) can have tremor as one of its symptoms.

There are other, more uncommon neurodegenerative diseases apart from PD and atypical parkinsonian syndromes that can manifest with tremor. Two of these include Wilson’s disease and Fragile X Tremor Ataxia Syndrome (FXTAS). These diseases have complex symptomatology and the larger neurologic picture aids in making the diagnosis.

To support your local Other causes of tremor besides Parkinson’s disease chapter, please click the button below: