Skip to content
APDA Living with Parkinson's PD and the microbiome

What is the microbiome?

The human gut harbors trillions of micro-organisms referred to collectively as the microbiome. Current understanding is that the microbiome provides a number of benefits to the human including help with digestion of food, help with warding off harmful microorganisms, aid in the absorption of particular nutrients, and creation of needed vitamins. These functions can influence the nervous system of the gut, called the enteric nervous system (ENS). In addition, the gut microbiome releases byproducts and metabolites that have effects on nerves. The microbiome varies from person to person and is influenced by many factors including diet, environment, and genetics. Although no two microbiomes are identical, people with certain diseases may share similarities in their microbiomes.

How is the microbiome different in people with PD? 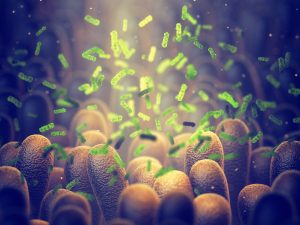 Based on numerous studies comparing the microbiome from the gut of people with PD with the microbiome from the gut of people without PD, there appear to be some differences. The studies are not consistent in their findings, but there are similarities across studies. These include an increase in certain families of bacteria such as Lactobacillaceae and Verrucomicrobiaceae, and a decrease in the family Prevotellaceae.

How are the gut and brain connected?

In a previous blog, we discussed how the ENS is directly connected to the brain through the vagus nerve which travels between the two. We highlighted a theory that suggests that Lewy bodies (an abnormal accumulation of alpha-synuclein), the pathologic hallmark of PD, develop first in the ENS and then can migrate to the brain via the vagus nerve. The brain and the gut also communicate via the bloodstream as well, through alterations in inflammatory signals, neurotoxins and neuroprotective factors. One of the elements that contributes to both these communication channels between the gut and the brain is the gut microbiome.

The microbiome and Parkinson’s Disease

Can an altered microbiome contribute to a diagnosis of PD?

Research studies in animals have shown that an altered microbiome might contribute to PD pathology. For example, one study showed that in a mouse model of PD that overexpressed alpha-synuclein, there was more alpha-synuclein accumulation (also known as Lewy bodies, the pathologic hallmark of PD) in the brain of the mice with an intact microbiome as compared to the same mice who were raised in a germ-free environment with no bacteria in their gut. This supports the theory that abnormal alpha-synuclein accumulation in the brain is enhanced by a particular microbiome in the gut.

Other studies showed that transplantation of fecal material from PD mice to normal mice, thereby introducing a “PD microbiome” into mice without PD pathology their brain, led to impairment of motor function and a decline in brain dopamine. These studies also support the theory that a particular microbiome might be integral in causing PD pathology in the brain.

How might an altered microbiome contribute to PD pathology?

These studies beg the question – how might the gut microbiome contribute to PD pathology in the brain? Several different theories have been proposed:

Intestinal Infections in the microbiome

Clinicians are already aware of changes in the microbiome that are actual intestinal infections that can have effects on PD.

These two conditions may be considered in a person with unexplained and unpredictable fluctuations of PD symptoms. They are typically diagnosed by a gastroenterologist and are treated with antibiotics.

With the awareness that the microbiome may play a role in PD, came the idea that altering the microbiome may help with PD symptoms. While there is still a lot of research to be done, there have been some small, but promising findings so far.

Probiotics, or particular strains of bacteria that are ingested in order to alter the gut microbiome, have been studied to help PD symptoms. A number of small studies suggest that probiotics may improve constipation in people with PD, which is a common problem for many people with the disease.

As mentioned above, treatment of Helicobacter pylori and SIBO typically requires antibiotics, which are drugs designed to kill particular bacteria. Antibiotics can be helpful, but are only considered if a particular gut organism is being targeted. Otherwise, antibiotics can kill both “good” and “bad” bacteria, and potentially be detrimental to the overall health of the gut microbiome.

Another idea that has been considered is fecal transplantation, a technique in which fecal matter from a healthy person is delivered to the gut of a person with PD, with the goal of restoring a less “PD-like” microbiome. Only case reports and very small studies have been reported so far in the literature, but this may be an area worth exploring. There are a few additional studies underway which you can read about here:

We await the results of this research to assess whether fecal transplantation will prove to be useful for patients with PD.

APDA funds gut microbiome research as it relates to PD

APDA is proud to fund the work of Dr. Livia Hecke-Morais in the area of PD and the microbiome. This research is so important because understanding the relationship between gut bacteria and disease can help to design novel therapies that manipulate gut bacteria for the treatment of PD.

To support your local PD and the microbiome chapter, please click the button below: