A conversation about genes in glial helper cells (and fruit flies!)

Our A Closer Look blog is designed to educate, inform, and inspire you through a variety of topics and insights about Parkinson’s disease (PD). One way we do that is through our Interview with APDA Researchers series within this blog so you can get a closer look at some of the dedicated APDA-funded researchers who are working tirelessly to understand this disease.

Today we introduce you to Dr. Abby Olsen, Associate Neurologist at Brigham and Women’s Hospital, and Instructor in Neurology at Harvard Medical School in Boston, MA. She is the recipient of APDA’s 2021 George C. Cotzias Memorial Fellowship, a prestigious three-year award given to a promising physician-scientist working in the field of PD research. Dr. Olsen is taking a unique approach to understanding PD and instead of studying the role of neurons in the disease, is studying an often-overlooked cell type in the brain, the glial cells. Glia represent approximately half of all cells in the human brain and perform many essential functions to allow the neurons to work. Many PD risk genes have been identified, and the majority of these genes are expressed (or turned on) in glia. Dr. Olsen is working to understand how glia may contribute to risk and progression of PD, which could lead to glial-based therapies that slow progression of Parkinson’s disease.

We asked her questions about her work.

Q: What is the overarching goal of your research? What do you hope to find out? 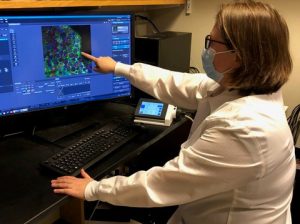 A: Our hope is that by understanding how glial cells contribute to PD, we will be able to develop therapies that specifically target these cells. We think that some things that glial cells do are helpful, whereas others are harmful. By better understanding this, we can try to improve on the helpful functions and weaken the harmful functions.

Q: How do you perform your studies?

A: Our studies rely heavily on the fruit fly. Although fruit flies have much simpler brains than people, they have a surprising amount in common with the human brain. We can create a “Parkinson’s-like disease” in flies by giving them the human alpha-synuclein gene. These flies develop many features of human PD, including slow movements.

We then do two major things in these flies with Parkinson’s-like disease:

First, we look at genes that have been found in human studies to be related to PD, and we test whether they have a function in glia in the fly. Examples include the PD risk genes LRRK2 and GBA. If these genes are doing something in fly glia, they may be doing something in human glia as well and knowing this is important for developing therapies that target these genes.

Second, we use the fly to find new genes that aren’t already known to be involved in PD. We decrease levels of one gene at a time in glia, looking for genes that either improve or worsen the Parkinson’s-like symptoms in the fly. We have done this for many hundreds of genes and will eventually do thousands.

Q: What you have discovered so far?

A: We have found that several genes that are known to be important for PD are acting at least in part in glia. This is important because if we only study neurons, we might not understand the 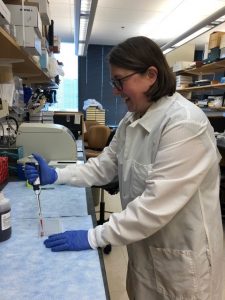 full picture of what these genes are doing. Additionally, glia used to be thought of as sort of general “helper cells,” but our research suggests the picture is more complex than that, in that different genes are doing very specific things in glia to influence the Parkinson’s-like disease. Understanding exactly what these PD risk genes are doing in different cell types is essential to understand the best way to create therapies that target them.

We have also found several glial genes that were not already known to have anything to do with PD but that can greatly improve the Parkinson’s-like symptoms in the fly. This is very exciting, because these genes will then be investigated in mouse models of PD and eventually in humans, moving us closer to being able to generate glial-based therapies that slow progression of Parkinson’s disease.  In some cases, there are already medications available that affect these genes in people, so it is possible that these existing medications could also be used for PD.

Q: What fuels your passion for Parkinson’s disease research?

A: I have wanted to be a scientist since elementary school, when I read a book about Dr. Barbara McClintock, a Nobel-prize winning geneticist. I was fascinated by the idea that we could study very simple organisms (maize, in her case; flies, in my case) to understand how human genes work.

Today, I love being a physician-scientist because I get to help patients on a day-to-day basis in the clinic, and then also do research in the lab to help more people in the long run. My patients constantly inspire me to ask new research questions. For example, constipation can be a major problem in PD, but it hasn’t been studied very much in the laboratory. After having so many conversations with patients about this problem, I developed a way to study it in the fly, so that we can better understand why it happens, and hopefully one day we will have better therapies.