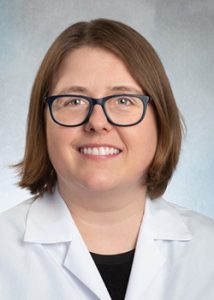 Harnessing the untapped therapeutic potential of glia in Parkinson’s disease

Abby Olsen, MD, PhD, is an Assistant Professor of Neurology at the University of Pittsburgh and UPMC. She is a graduate of Carleton College in Northfield, MN, and completed her MD, PhD at the University of Pennsylvania, followed by residency in Neurology and fellowship training in Movement Disorders at Massachusetts General Hospital/Brigham and Women’s. Dr. Olsen is the recipient of an NINDS K08 award, a Department of Defense Parkinson’s Disease Early Investigator Award, and an award from the Alzheimer Disease Research Association. Her research utilizes a combination of Drosophila and human genetics to identify novel glial genes that contribute to the pathogenesis of Parkinson’s disease (PD) and other alpha-synucleinopathies, with the long-term goal of developing glial-based therapeutics for alpha-synucleinopathies. Additionally, she studies gene-environment interactions that contribute to the disease. In the clinic, she enjoys caring for patients with Parkinson’s disease and Parkinson’s Plus syndromes.

The long-term goal of my research is to develop new treatments for Parkinson’s disease by investigating cell types that have been previously overlooked. Specifically, I am interested in glia, which are the brain’s helper cells that support the neurons (nerve cells). The goal of this project to understand which glial genes are important in PD in order to eventually develop glial-based therapies for the disease.

Glia represent approximately half of all cells in the human brain and perform many essential functions to allow the neurons to work. Many PD risk genes have been identified, and the majority of these genes are expressed (turned on) in glia. This suggests that glia may contribute to risk and progression of PD. In spite of this, glia have been understudied as a source of possible therapeutic targets for PD. By understanding how glia contribute to the disease, we can identify new genes that may be good targets for drug therapy.

To study glial genes, I use a powerful fruit fly model of PD. In this model, I can independently control gene expression in neurons and glia. In the neurons, I express human alpha-synuclein, the protein that misfolds in PD. These flies develop the key features of human PD, including motor dysfunction, alpha-synuclein accumulation in the brain, and death of dopamine-producing neurons. In the glia, I can decrease expression of any gene and then measure the effect on motor dysfunction in the flies. This allows me to identify glial genes that improve motor functioning in the fly when their expression is decreased. These genes are potential therapeutic targets for PD. The long-term goal is to inhibit them with a medication in people to see if that improves motor functioning and slows down progression of the disease.

In the first part of this proposal, I will perform a genetic screen in the fruit fly model of PD, manipulating expression of 600 genes in glia. These 600 genes have been chosen because they have human counterparts that are known to be targets of FDA-approved drugs. I have already conducted preliminary studies, successfully identifying multiple glial genes that enhance or suppress the motor dysfunction.

These experiments will generate a list of high priority glial genes that have a demonstrated effect on PD in the whole brain in the fly model as well as in human cells. In the future, these genes will be investigated in mouse models of PD and eventually in humans, moving us closer to being able to generate glial-based therapies that slow progression of Parkinson’s disease.