I’m so thankful to those of you who submit potential topics for my blog as it helps me understand what you would like to know more about. A frequent topic that I am asked about is symptoms of Parkinson’s disease (PD) that are caused by medications. So today, I will address drug-induced parkinsonism.

The motor features of PD are often (but not always) very easy to see via a neurologic exam in a doctor’s office. Rest tremor (which is a tremor that goes away with movement, but often returns when the limb is at rest) for example, is seen in virtually no other illness and can therefore be very important in diagnosing PD. But there is one other common condition that induces the symptoms of PD, including a rest tremor, which must be 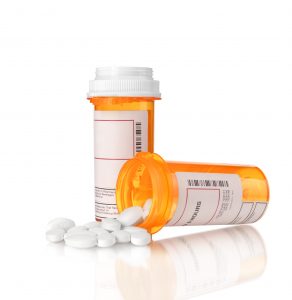 considered every time PD is being considered as a diagnosis, and that is drug-induced parkinsonism.

Parkinsonism is not technically a diagnosis, but rather a set of symptoms including slowness, stiffness, rest tremor, and problems with walking and balance. This set of symptoms can be caused by PD, but also can occur as a side effect of certain prescription medications (that have nothing to do with PD).

A number of medications can cause parkinsonism because they block the dopamine receptor and thereby mimic the symptoms of PD that are caused by loss of dopamine neurons in the brain. Reviewing a patient’s medications is therefore a critical step for a neurologist when seeing someone with parkinsonism. Anti-psychotics and anti-nausea treatments make up the bulk of the problematic medications, although there are other medications that can also cause parkinsonism. The primary treatment for this type of parkinsonism is weaning off of the offending medication, if possible.

For some people, it is not possible to stop the problematic medication. For example, some people with bipolar disorder or schizophrenia have tried multiple medications to control their mental health issues and the one that works best also causes parkinsonism. In these difficult situations, some amount of parkinsonism might be tolerated in order to maximize the person’s mental health. This is a tricky clinical situation, and one that typically requires the psychiatrist and neurologist to work together to optimize the circumstances.

The connection between PD and drug-induced parkinsonism

In addition to potentially causing parkinsonism in the general population, these medications should definitely be avoided in people who have parkinsonism from other causes, such as PD. APDA has created a list of Medications to be Avoided or Used With Caution in Parkinson’s Disease. It is important to note that there are anti-psychotics and anti-nausea medications which do not cause parkinsonism and can be used safely by people with PD.

Sometimes, a person without a diagnosis of PD is prescribed a medication which leads to a side effect of drug-induced parkinsonism. The prescribing physician may stop the new medication, but the parkinsonism does not resolve. The patient remains off the medication with continuing symptoms, and eventually is given a diagnosis of PD. In this scenario, that person most likely had dopamine depletion in the brain (prior to going on the medication) which had not yet manifested as a clinical symptom. The prescription medication that blocked the dopamine receptor, was the proverbial “straw that broke the camel’s back”, inducing the full-fledged symptoms of dopamine depletion and revealing that the person did in fact have PD.

The differences of PD vs drug-induced parkinsonism

There are key differences to note between parkinsonism from PD and parkinsonism as a side effect of medication.

Therefore, if someone without a diagnosis of PD has been started on one of these medications and develops parkinsonism that is not symmetric on both sides of the body and, upon investigation, does harbor some of the typical PD non-motor symptoms, a clinician may be suspicious of a potential underlying diagnosis of PD.

In addition to drug-induced parkinsonism, which includes rest tremor and is caused by medications that block the dopamine receptor, there are also a wide variety of medications that do not block the dopamine receptor, but can cause other types of tremors, such as postural and action tremors. So if you have these types of tremors, but without the slowness, stiffness and other PD-like symptoms, you could have drug-induced tremor (not drug-induced parkinsonism).

Drug-induced tremors typically are symmetric or equal on both sides of the body. The medications that can cause tremor include, but are not limited to, lithium, valproic acid, amiodarone, beta-adrenergic agonists, and selective serotonin reuptake inhibitors (SSRIs). Be attentive to whether a tremor starts after any new medication is started. If it does, discuss this with your doctor.

The bottom line is, whether you are or are not diagnosed with PD, be aware of changes that may occur upon starting a new medication. Parkinsonism, as well as various types of tremor, can be a side effect of certain medications and can resolve with stopping the offending medication. Bring all your concerns to the attention of your physicians and remember to always consult with your physician before you make any changes to your medication regimen.

To support your local Drug-induced parkinsonism chapter, please click the button below: