The Importance of Bone Health and Parkinson’s Disease

Falls can be a major difficulty for people with Parkinson’s disease (PD), leading to fractures and other injuries. People with PD are at increased risk of fracture, with a four times higher risk of hip fracture as compared with the general population. Often, a person with PD will return to their baseline after recovery from a fracture. However, for some, a fracture, and its resultant immobility, as 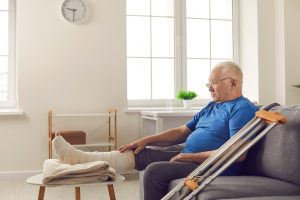 well as the effects of a potential surgery and hospitalization, will lead to permanent decline in their condition.  Therefore, steps to prevent falls is a key goal of PD management.

Bone density is assessed using a simple test called dual-energy X-ray absorptiometry (DEXA) also known as bone densitometry. X-ray technology is used to measure the density of the hip and spine bones. Depending on the level of mineralization of the bones, the test can diagnose osteoporosis, which literally means “porous bones”.

There are several avenues of research to suggest why people with PD have bones that are less dense than the general population:

In addition, low bone density can be a direct consequence of the symptoms of PD. A person with PD may:

Good news! Low bone density can be successfully treated – including in people with PD.

Weight bearing activities and exercise are vital in maintaining bone strength. This adds yet another reason why exercise is so important in PD management. (To learn more about getting started with exercise, check out our free Be Active & Beyond exercise guide, which is also available in Spanish.) Consider joining an exercise class or enlisting the help of a physical therapist or personal trainer – but look for ones that are specialized for people with PD to ensure that they are safe and appropriate. There are many exercise classes you can join virtually from home.

There are also many available medications for osteoporosis to improve bone mineralization and decrease risk of fracture. For these reasons, it is very important for bone density to be tested so that treatment can be initiated if necessary. Based on your test results, your doctor may talk to you about medication options (in addition to exercise) to increase your bone mineralization.

Vitamin D and its association with Parkinson’s Disease

Besides the clear importance of Vitamin D in maintaining bone health in people with PD, there have also been numerous studies investigating other associations between Vitamin D and PD. There are conflicting results as to whether low levels of Vitamin D are associated with an increased risk of developing PD. In addition, some studies demonstrate an increased rate of Vitamin D deficiency in people with PD as compared to age matched controls and even link low Vitamin D levels to increased severity of PD symptoms. There are conflicting results as to whether Vitamin D supplementation can reduce symptoms of PD. More studies are necessary to clarify these associations.

Vitamin D is a critical nutrient which is derived from two sources – your diet and exposure to sunlight. There are not many foods that contain Vitamin D, so about 70-80% of our Vitamin D needs to be obtained from sunlight (Ultraviolet B from sunlight converts a steroid precursor in the skin to Vitamin D.) Vitamin D plays many roles in the body, including helping with calcium absorption from food and supporting mineralization of bone. (To get some Vitamin D from your diet, try salmon, canned tuna, and mushrooms which naturally contain Vitamin D. There are also many milk, yogurt, and orange juice options that are fortified with Vitamin D.)

Vitamin D levels can be tested in blood. If it is low, over the counter supplements are readily available. Talk with your doctor about whether your Vitamin D level should be checked and how much supplementation you should take.

Despite optimization of fall prevention and bone strength, people with PD may still experience fractures. The hip is a common site of injury which typically requires surgical intervention. It is reassuring to note, that should this be necessary, immediate post-op complications of hip fracture surgery are the same in people with PD as compared to age matched controls.

However, more long-standing complications after hip fracture do occur in people with PD including:

Clearly, prevention of falls and fractures should be a priority for people with PD. Be sure to talk to your doctor about the many options you have to increase your chances of success in this area.

An ongoing clinical trial is seeking participants to study the use of Zolendronate in the prevention of fracture in people with PD. Zolendronate is a medication already approved by the Food and Drug Administration for the prevention of fractures in people with osteoporosis. The TOPAZ study is investigating the role of this medication in preventing fractures in people with PD. You do not need to travel anywhere to participate in the study. Enrollment is online and you will receive a study kit by mail. A research nurse makes a one-time visit to the home. Follow up visits are conducted via email or phone. To learn more about this study, visit the study website.

To support your local Bone health and Parkinson’s disease chapter, please click the button below: