People with Parkinson’s disease (PD) may have a variety of complaints related to their vision such as trouble reading, double vision and dry eyes. While these issues don’t affect every person with PD, it is important to know what the different issues are and that there are a variety of ways to treat them. 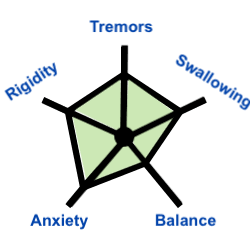 Easily track and communicate your symptoms with your healthcare provider.

How Parkinson’s Affects Your Eyes

There are three fundamental types of eye movements.

In PD, the saccades tend to be slow, which means reading can be difficult if the eyes are unable to find the correct place on the next line. If a person has Levodopa-induced dyskinesias, the saccades can become fast and erratic which can also be problematic.

Another common eye movement issue for people with PD is difficulty with vergence eye movements. In PD, the eyes are often not able to come together sufficiently as a target draws near. This is called convergence insufficiency, which can cause double vision, especially when focusing on near tasks. This problem can also affect a person’s ability to read.

If a person with PD is having visual complaints, the first thing to consider is whether a simple refractive error is contributing to the problem. This is a common cause of vision issues for many people with and without PD, and as we age, it is normal for a lens prescription to need adjustment over time. A refractive error can be picked up by an ophthalmologist or optometrist. In order to diagnose an eye movement problem however, different types of evaluations need to be done that may not be performed at a routine visit with an ophthalmologist. Therefore, if you are having visual problems and a trip to the ophthalmologist with a new lens prescription does not solve the problem, ask for a referral to a neuro-ophthalmologist.

If an eye movement abnormality is found, you may be prescribed two pairs of glasses, one for distance and the other for close activities and reading. This often works better than bifocals. If you are found to have convergence insufficiency, you may be prescribed glasses with prisms. A neuro-ophthalmologist may in turn refer you to an ophthalmologist or optometrist with special training in fitting prisms. Often these are pediatric ophthalmologists or optometrists since convergence insufficiency is common in children. Prisms help to bend light to the proper focal point on the retina when the eyes are not able to achieve this on their own.

In terms of complementary and alternative therapies, art therapy has been seen to alleviate some of the vision effects associated with Parkinson’s disease.

The blink reflex, which occurs normally at about 16 to 18 times per minute, may decrease in PD, sometimes substantially. Less commonly, the flipside may occur, with excessive blinking known as blepharospasm. Occasionally, there is apraxia of eyelid opening, which is an inability to open the eyes voluntarily.

People with PD who have blepharospasm may benefit from injections of botulinum toxin in the muscle surrounding the eye. This treatment, performed by a movement disorders specialist, ophthalmologist or neuro-ophthalmologist, is usually repeated every three to four months and can be very effective. Those who experience apraxia of eyelid opening can also sometimes benefit from botulinum toxin injections. In addition, lid crutches can be used to help keep the eyes open.

Decreased blinking can cause dry eyes. In addition, as a result of the dysfunction of the autonomic nervous system, blepharitis, or irritation of the eyelids can occur.

Blepharitis can be managed with warm, moist compresses, lid scrubs, and at times, medicated ointments. Dry eyes can be treated with artificial tear substitutes in an eyedrop or an ointment form. These treatments can go a long way toward making the eyes look and feel better, and increase vision.

Dopamine neurons in the retina can be lost in PD. The dysfunction of these neurons can lead to a loss of contrast sensitivity for some people making it more difficult to distinguish between items that are of similar color intensity. There can also be color vision deficits, usually along the blue-yellow axis making it harder to distinguish certain colors from others. Visual disturbances, such as visual hallucinations can also occur. Although it is difficult to treat the sensory deficits which at times can affect people with PD, sometimes certain lens tints can be helpful.

Finally, in addition to everything already discussed, a person with PD can still get the garden variety ophthalmologic diseases, just like everyone else. Diseases such as glaucoma, cataracts and macular degeneration must also be properly diagnosed and managed. With proper attention to each problem, as well as routine eye care, people with PD can protect and improve their vision.

To support your local Eye & Vision Issues chapter, please click the button below: