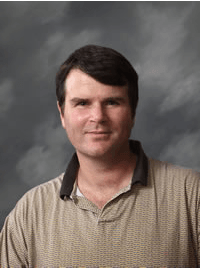 Dr. Witt is professor in the departments of Biochemistry & Molecular Biology and Pharmacology, Toxicology & Neuroscience at the Louisiana State University Health Sciences Center in Shreveport. He attended the California Institute of Technology and Stanford for his graduate and postdoctoral studies, respectively. He has conducted research on Parkinson’s Disease supported by funds from the NIH and APDA for more than 10- years. Dr. Witt is one of the pioneers that established and validated yeast as a model system for studying how the Parkinson’s Disease associated protein alpha synuclein triggers cell death.  A major finding from his lab is that yeast cells that have a low level of the phospholipid phosphatidylethanolamine (PE), which is a key component of cell membranes, have a high level of alpha synuclein.  Overall, the goals of the Witt research group are to (i) understand at a molecular level how alpha synuclein kills cells, (ii) elucidate the molecular connections between melanoma and PD, and (iii) find neuroprotective and neurorestorative drugs for PD.

This study will conduct preclinical tests to determine whether the drug CDP-ethanolamine (CDP-ETA) protects against alpha synuclein-induced pathology and behavioral deficits in a progressive mouse model of PD.  The Witt group recently discovered that alpha synuclein accumulates and is toxic to yeast cells that have chronically low levels of the membrane phospholipid phosphatidylethanolamine (PE).

Although the metabolite ethanolamine is present in all bodily fluids, its function is not well understood.  It is used to synthesize PE, and it also forms when enzymes degrade PE and other lipids.

Phase 1 of this study is a pharmacokinetic analysis of CDP-ethanolamine. The goal is to determine the steady-state level of the drug in the periphery and brain of mice and the half-life of the drug.   This information will be used to guide us as to the appropriate dose and dosing schedule for the administration of the drug to mice. Phase 2 is the administration of daily injections of CDP-ethanolamine to Parkinson’s Disease mice to determine whether the drug ameliorates the alpha synuclein-induced pathology and behavioral deficits (compared to untreated control animals) typically seen in Parkinson’s Disease mice.

The hope is that CDP-ethanolamine, which is an activated form of ethanolamine, can be used as a supplement on a long-term basis to protect neurons from the type of neurodegeneration that occurs in PD.