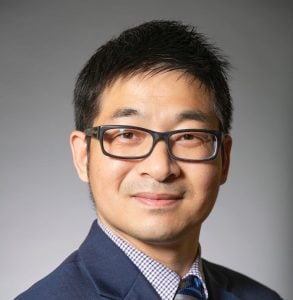 Dr. Dong is an Instructor of Neurology at Harvard Medical School, a faculty member in Neurology at the Ann Romney Center for Neurological Disease, and a core faculty member of the APDA Center for Advanced Research at Brigham and Women’s Hospital. He has served as the Director of Computational Neuroscience of the Precision Neurology Program at Brigham and Women’s Hospital since 2016. He received his BSc and MSc degree in Biomedical Engineering from Southeast University, China and his PhD. degree in Bioinformatics and Genomics from the University of Bergen, Norway. He continued his post-doctoral training in the Program of Bioinformatics and Integrative Biology at the University of Massachusetts Medical School. Dr. Dong’s research interest is to combine both computer science and high-throughput experimental methods to understand how the human genome, especially its non-protein-coding parts, function in the brains of healthy people and patients with neurodegeneration diseases.

This study aims to systematically compile circRNAs expressed in dopamine neurons. We will then identify the circRNAs that may have relevance to the development of Parkinson’s disease (PD).

Recent large-scale genome-wide association studies (GWAS) have identified over 41 areas of the genome that are associated with an increased risk of PD. However, most of these areas are located within noncoding genomic regions, portions of the genome that are not translated into protein. We have been studying how these non-coding regions increase PD risk. Recently, circular RNAs (circRNA) have emerged as a new class of non-coding RNAs that exist in a highly stable circular format. Thousands of circRNAs are prominently enriched in brain tissue, especially around the synapse, the space between one neuron and the next. Importantly, synaptic dysfunction, or the inability for one neuron to communicate with its neighbors is emerging as an early sign of PD, preceding the onset of neuronal death. We seek to understand if certain circRNAs are associated with development of PD.

In this study, we will first catalog all novel and known circRNAs specifically expressed in dopamine neurons. For this part of the study, we will use the comprehensive dopamine neuron RNA database that we previously created. We will then look for circRNAs whose expression levels are different in brain samples of people with Lewy bodies vs healthy controls. We will also pinpoint circRNAs regulated by the areas of the genome that have previously been identified as associated with increased PD risk.

This study will investigate for the first time the role of circRNAs in susceptibility to PD. RNA-based treatments are now being tested for a variety of conditions, making this work highly translatable. circRNAs have many advantages over linear RNAs making them potentially better suited for translation into therapeutics and diagnostics. These advantages include higher stability, and robust detectability in biofluids. Thus, the stable, PD associated-circRNAs identified here have the potential to lead to innovative RNA-based therapies as well as act as biomarkers.

To support your local Xianjun Dong, PhD chapter, please click the button below: