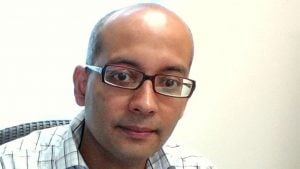 Molecular Mechanisms of Neuroprotection by Nicotine in Parkinson’s disease

Dr. Srinivasan obtained his medical degree from the University of Mumbai, India and a PhD in Human Genetics from the University of Pittsburgh. He completed his postdoctoral training at the California Institute of Technology and further trained as an Assistant Research Physiologist at UCLA. He is currently an Assistant Professor in the Department of Neuroscience & Experimental Therapeutics at the Texas A&M University Health Science Center. His research focus is to understand the molecular mechanisms that lead to neurodegeneration and to develop effective neuroprotective treatments for Parkinson’s disease.

Tobacco use is inversely correlated with the risk of developing Parkinson’s disease (PD), but mechanisms underlying this effect remain to be elucidated. In smokers, nicotine is assumed to act via “outside-in” pharmacology, in which the drug binds to and activates neuronal nicotinic acetylcholine receptors (nAChRs) on the surface of the cell. This fails to explain neuroprotection because the steady-state plasma nicotine concentration (~100 to 200 nM) achieved in smokers cannot activate nAChRs. We suggest an alternative “inside-out” mechanism for nicotine neuroprotection that does not involve nAChR activation.
We have shown that during this process, nanomolar, sub-activating concentrations of nicotine are sufficient to exert neuroprotection in dopaminergic neurons via binding to and chaperoning nAChRs through the cellular secretory pathway. Specifically, pharmacological chaperoning of nAChRs by nicotine attenuates the endoplasmic reticulum (ER) stress response in dopaminergic neurons. Since ER stress is thought to be a causative factor in the pathogenesis of Parkinson’s disease, these studies suggest that nicotine exerts neuroprotection by reducing the ER stress response in dopaminergic neurons.
This project will expand on previous work by testing if nicotine reduces the ER stress response in dopaminergic neurons following a variety of known toxic insults that cause neurodegeneration such as the mitochondrial toxin, MPTP; the free oxygen radical generator, 6-OHDA; the ER stress inducer, tunicamycin and α-synuclein overexpression. We will also test a variety of nicotinic ligands such as the partial agonists, cytisine and varenicline and an antagonist, DhE. These studies will be performed on primary mouse dopaminergic neuron cultures.
This project will provide the crucial data needed to understand if pharmacological chaperoning is sufficient to exert neuroprotection and will pave the way for developing effective neuroprotective strategies to treat Parkinson’s disease. The overall objective to understand the molecular mechanisms by which nicotine exerts its well documented neuroprotective effect in Parkinson’s disease and to harness those mechanisms as a strategy to treat Parkinson’s disease.

To support your local Rahul Srinivasan, PhD chapter, please click the button below: