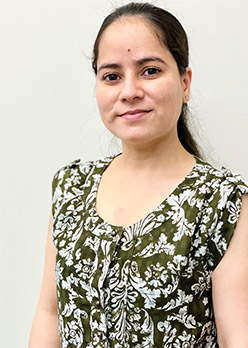 Dr. Sharma is a post-doctoral fellow at Brigham and Women’s Hospital and Harvard Medical School. She received her doctoral degree from the University of Alberta, Canada under the tutelage of Prof. Patrick Flood, where she studied the role of the beta2-adrenergic receptor (beta2AR) in regulating the immune responses in Parkinson’s disease (PD). In 2019, Dr. Sharma joined the Scherzer Laboratory at the APDA Center for Advanced Research of Brigham and Women’s Hospital.

To identify a novel neuronal mitochondrial pathway and explore how it is protective against PD pathology.

Dysfunction of the mitochondria, the energy producing machinery of the cell, has been heavily implicated in the development of PD. Moreover, multiple lines of evidence indicate that the PD-gene alpha-synuclein also impacts mitochondrial function. However, the exact mitochondrial mechanism that contributes to development of PD remains unclear and no mitochondrially-targeted medications are on the horizon. Here we will build on work from our group and others, which found that beta2AR activation down-regulates alpha-synuclein and offers neuroprotection in cellular and animal models of PD. In this study, we aim to determine whether activation of the beta2AR can activate specific mitochondrial pathways in dopamine neurons, thereby contributing to neuroprotection.

Using dopamine neurons engineered from patient stem cells and rat neurons, we will study the ribonucleic acid (RNA) and proteins produced by the cells’ mitochondria depending on whether the beta2AR is activated or not. This will allow us to study the changes in mitochondrially targeted genes, their products, and their functions as beta2AR is activated. We will also test whether activation of this mechanism reverses alpha-synuclein-induced mitochondrial pathology in patient-derived dopamine neurons carrying three copies of the alpha-synuclein gene, as compared to controls.

This study has the potential to identify a novel mitochondrial mechanism that may provide multiple targets for therapies for PD.

To support your local Monika Sharma, PhD chapter, please click the button below: