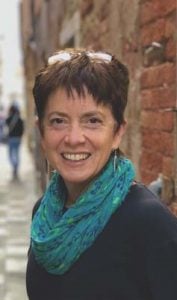 Dr. Driscoll received her A.B. degree in Chemistry from Douglass College of Rutgers University in 1979 and earned a PhD in Biochemistry and Molecular Biology at Harvard University in 1985, studying molecular and genetic regulation of gene expression in a yeast model system. She pursued postdoctoral studies in the lab of 2008 Nobel Prize recipient Dr. Martin Chalfie at Columbia University, where she began her work on the simple animal model C. elegans, focusing on deciphering molecular mechanisms of genetically induced neuronal degeneration. She joined the faculty of the Department of Molecular Biology and Biochemistry at Rutgers University in 1991, and is currently a Distinguished Professor in this department. Her lab now focuses on fundamental problems in the biology of aging and neurodegeneration.

This project will define genes and molecular mechanisms that influence the ability of neurons to package and throw out damaged mitochondria and protein aggregates in exophers.

In previous work we discovered that both neurotoxic protein aggregates and dysfunctional mitochondria can be removed from C. elegans neurons and disposed of outside of the cell, in packages that we termed exophers. In old age, or under excess stress such as when PD-related genes are defective, this mechanism may become dysregulated and harmful to cells. For example, we have shown that when the equivalent Parkin protein is eliminated in C elegans, disposal of mitochondria into exophers is increased. Figuring out the molecular details of how and why harmful cellular trash is recognized, trafficked, and packaged for disposal may therefore identify novel targets for PD therapies.

We are able to grow strains of the simple roundworm C. elegans in which we can track fluorescently-labelled mitochondria in specific neurons. We have also developed a system in which we can selectively eliminate the activity of a single gene within a neuron and then watch the effect of the silencing of the gene on the transfer of the fluorescent mitochondria into exophers. In this way, we will identify specific genes that contribute to the exopher mechanism.

1) If we understand the basic mechanisms of how nerve cells get rid of what is determined to be toxic garbage, we may understand how α -synuclein is transferred from one neuron to another; 2) If exophers that dispose of mitochondria are hyperactivated or dysfunctional in PD, then understanding how exophers form can help to design new therapies for PD.

To support your local Monica Driscoll, PhD chapter, please click the button below: