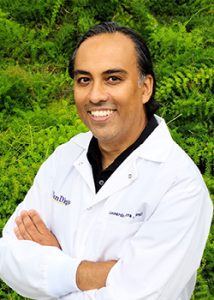 Dr. Parra received his B.S. and M.S. Degree in Biochemistry from the Catholic University of Valparaiso, Chile. He conducted research in the laboratory of Dr. Gonzalo Torres at the University of Pittsburgh, where he focused on the regulation of dopamine and the physiological role of brain specific transporters. Dr. Parra obtained his M.S. in Clinical Investigation and PhD in Neuroscience under the direction of Dr. Erik Jorgensen at the University of Utah (a laboratory of the Howard Hughes Medical Institute), where he studied the molecular basis of synaptic transmission, the crosstalk between neurons. Currently, he continues his post-doctoral training with Dr. Subhojit Roy at the University of California San Diego. In the Roy lab his research focuses on the molecular mechanisms underlying the functions of synaptic proteins in neurodegenerative disorders.

The overall goal of this project is to clarify the pathophysiologic roles of α-synuclein in human neurons.

To evaluate α-synuclein function I will combine contemporary genome-editing technologies to deplete or activate α-synuclein, along with optical and electrophysiologic assays to study neuronal function in human iPSCs-derived neurons. In parallel, using new methods to model α-synuclein aggregation in human neurons, I will determine if the aggregates are harmful or protective to neurons.

α-synuclein is a key protein involved in pathology of Parkinson’s disease. Understanding the normal function of α-synuclein and its role during disease progression is essential for the development of new therapies. I anticipate that my findings and the genetic tools developed in this project will contribute directly to future gene therapy treatments for Parkinson’s disease.

To support your local Leonardo Parra-Rivas, PhD chapter, please click the button below: