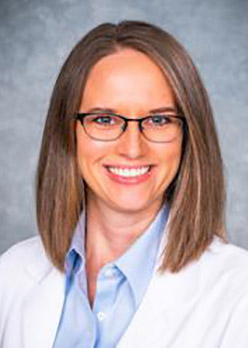 Dr. Bentley received her B.S. from the University of Georgia and her M.D. from the Medical College of Georgia. She completed clinical residency training in Neurosurgery at the University of Michigan and subspecialty training in Stereotactic and Functional Neurosurgery at Emory University. She is currently an Assistant Professor in the Department of Neurosurgery at the University of Alabama in Birmingham, Alabama, and works closely with the Department of Neurology performing deep brain stimulation (DBS) surgery for movement disorders and surgery for epilepsy. Her laboratory is focused on analyzing brain signals recorded from patients performing various cognitive tasks during awake surgeries, in order to understand how neuronal signaling patterns give rise to cognitive control, and how cognitive impairment arises from dysfunctional circuits.

To determine the neural signals arising from prefrontal-basal ganglia networks that underlie cognitive control in Parkinson’s disease (PD), and to investigate whether alternative patterns of DBS can improve cognitive task performance.

Cognitive impairment is very common in PD and is a significant source of disability even after motor symptoms are well-controlled with medications or DBS. Cognitive impairment manifests in many different ways, including dysfunction in memory, attention, and processing speed. Of particular importance in PD is reduced inhibitory control, a cognitive process that allows for inhibition of an impulsive response to a stimulus. Impairments of inhibitory control can lead to an inability to adapt to changing environmental conditions and is associated with falls and freezing of gait.

Neuronal oscillations, or brainwaves, underlie many cognitive processes, including inhibitory control. PD patients have reduced activity of various type of neuronal oscillations, which correlates with slower response times in cognitive tasks. DBS, while highly effective for motor symptoms, is ineffective for improving cognitive function under current high-frequency programming paradigms. There is data however, that low-frequency programming paradigms may have promise in improving cognitive performance.

We will recruit 10 patients with PD who are undergoing DBS surgery for treatment of their PD motor symptoms. We will investigate neuronal oscillations in the prefrontal cortex and subcortical brain areas as the patients perform an inhibitory control cognitive task during deep brain stimulation surgery. We will also measure changes in these patterns when we deliver low-frequency stimulation.

We will perform signal analyses and measure connectivity between prefrontal and subcortical targets during the task. We will measure how these parameters change during low frequency stimulation, correlating power and connectivity with cognitive performance.

Our hypothesis is that patients with pre-existing mild cognitive impairment will have larger improvements in measures of inhibitory control during low frequency stimulation, correlating to greater increases in prefrontal power spectra and connectivity.

The findings from this study will help to inform future research protocols investigating the ability of DBS to improve cognitive performance in PD with cognitive impairment.