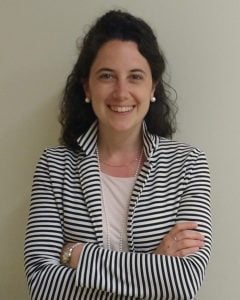 Dr. Riboldi is a post-doctoral fellow at the Fresco Institute for Parkinson’s disease and Movement Disorders at NYU Langone Health. She received her MD at the University of Milan (Italy) where she also completed her Neurology Residency. Before joining NYU, she worked as a post-doctoral fellow at Columbia University’s Motor Neuron Center where she studied the molecular mechanisms of neurodegenerative disorders.

The goal of this project is to better understand the role of glucocerebrosidase (GBA) mutations in the pathogenesis of PD.

GBA is an enzyme that breaks down a large molecule called glucocerebroside, thereby keeping it from accumulating in cells. Mutations in both copies of the GBA gene, in which glucocerebroside does accumulate, is the cause of Gaucher’s disease. Mutations in one (or both) copies of the GBA gene is also a genetic risk factor for development of PD. However, only a small percentage of GBA carriers develop the disease and it is not yet clear why some people with the mutation develop it and others do not. This project investigates whether interaction with other genetic modifiers is responsible for the pathogenicity of GBA mutations in susceptible subjects.

To support your local Giulietta Riboldi, MD chapter, please click the button below: