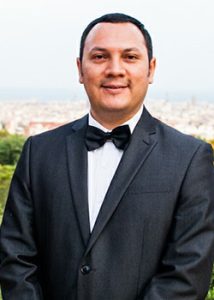 Clinical, epidemiological, and cognitive characterization of Parkinson’s disease in the Mexican population

Dr. Miguel E. Rentería is an Atlantic Lifelong Fellow for Equity in Brain Health at the Global Brain Health Institute, University of California, San Francisco. Previously, he was a Postdoctoral Researcher at the APDA Center for Advanced Research, Brigham & Women’s Hospital and Harvard Medical School in Boston, MA and an NHMRC Research Fellow at the QIMR Berghofer Medical Research Institute in Australia. He obtained his PhD in Human Genetics at the University of Queensland, Australia, and a Master of Public Policy at the University of Oxford, UK. He is the Principal Investigator of the Australian Parkinson’s Genetics Study in Australia and, together with his collaborators in Mexico and the LARGE-PD consortium, they have set up MEX-PD, a Parkinson’s clinical and research network to characterize the etiology and risk factors for the disease in the admixed Mexican population.

This project seeks to recruit and characterize 1,000 Mexican Parkinson’s disease (PD) patients over two years and will provide novel insights about their clinical, cognitive, epidemiological, social, and genetic diversity.

PD is a highly heterogeneous condition. The onset, intensity, and progression of the disease vary significantly from patient to patient, and the mechanisms underlying that variability are unknown. Although PD affects individuals from all ethnic groups, most of our current understanding of the etiology, pathophysiology, phenotypic diversity, and progression of PD comes from research in European ancestry participants from the USA and Europe, but growing evidence suggests that ethnicity, as well as social and environmental factors, are associated with differences in PD epidemiology, clinical manifestations, and mortality. Therefore, it is crucial to adequately characterize diverse groups of PD patients to understand the underlying causes of those differences.

MEX-PD is a multi-center cohort study with the long-term goal of characterizing the clinical, genetic, and phenotypic diversity of PD patients in Mexico. Initial data collection for the project has been supported by the Latin American Research Consortium on the Genetics of Parkinson’s Disease (LARGE-PD). In its initial scope, the plan consisted of collecting DNA samples and a set of standard LARGE-PD variables regarding PD diagnosis and basic socio-demographics. This APDA award will enable us to conduct a much deeper phenotyping of study participants, involving (1) a computerized assessment of cognitive function, (2) a comprehensive evaluation of non-motor symptoms and clinical comorbidities, and (3) a questionnaire on environmental and social determinants of health

This proposal directly addresses the need to broaden our understanding of PD in under-studied populations. Beyond Mexico, our research may be relevant to other comparable demographic groups, such as in other Latin American countries and Latinos in the USA.