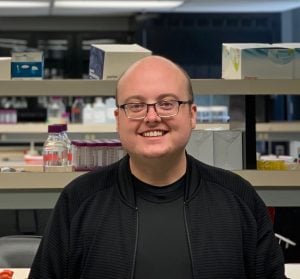 Dr. Daniels received his PhD in neuroscience from Washington University in St. Louis, followed by postdoctoral training in immunology in Seattle at the University of Washington. He joined the faculty at Rutgers as Assistant Professor of Cell Biology and Neuroscience in 2019. The Daniels lab pursues studies focused on the causes and consequences of neuroinflammation during diverse disease states, including viral infection, traumatic injury, and neurodegenerative conditions such as Parkinson’s Disease (PD).

Neurodegenerative conditions such as PD are accompanied by activation of an immune response in the brain. Astrocytes, a cell type in the brain with a variety of functions, can become activated during the progression of PD in a process known as reactive gliosis. However, the cellular and molecular mechanisms that govern this astrocyte activation in PD are poorly understood.

The receptor interacting protein kinases (RIPKs) are signaling molecules with important functions in promoting inflammation. Recent work has established that RIPK signaling is a potent inducer of neuroinflammation in a variety of neurodegenerative conditions, including Alzheimer’s disease and Amyotrophic lateral sclerosis (ALS). RIPK inhibitors are currently in clinical trials for several neurological disorders. While RIPK activity has been observed in the context of PD, roles for this pathway in the promotion of neuroinflammation during PD have not yet been characterized. In this proposal, we will test the hypothesis that RIPK signaling is a driver of pathologic astrocyte activation. These studies aim to uncover fundamental mechanisms of inflammatory astrocyte activation during dopamine neuron degeneration, with the goal of identifying new targets for the treatment of neuroinflammation during PD.

We will use several new genetic systems to selectively manipulate RIPK3 signaling in astrocytes, both in cell culture systems and in a mouse model of PD. For our mouse studies, we will use a well-established model in which mice are administered a neurotoxin that selectively kills dopamine neurons in the midbrain. We will then assess how astrocytes respond to inflammatory cues derived from these dying neurons when their RIPK3 expression is either selectively deleted or artificially increased.

Our studies defining cellular and molecular mechanisms of RIPK3-mediated neuroinflammation will help to design therapies that target this process in PD. Given the current promise of RIPK inhibitors in clinical trials for other neurodegenerative diseases, our studies will hopefully bring us nearer to trying these inhibitors in PD as well.

To support your local Brian Daniels, PhD chapter, please click the button below: