The Relationship Between Pesticides and Parkinson’s

A discussion of how environmental factors, such as pesticides, may affect your risk of Parkinson’s disease

During my recent interview on Wisconsin Public Radio, many of the callers asked questions related to environmental risks of Parkinson’s disease (PD), specifically, exposures related to farming. Those calls prompted me to delve further into this complicated and murky topic.

Before we start discussing specific factors in the environment that may increase risk of PD, let’s understand some basic ground rules that will help put this topic in perspective

With that background, let us begin.

Rural living and an increased risk of PD

In the 1980s, studies were conducted that showed that early-age exposure to a rural environment as well as exposure to well water were associated with development of PD later in life. Subsequently, multiple additional studies looked at these questions. The studies are mixed in their conclusions, but overall the evidence supports associations between increased PD risk with each of the following:

Of course, all these categories are inter-related, since farmers live on farms in rural areas, are exposed to farm animals, are more likely than urban dwellers to drink well water and use pesticides. The studies were attempting to tease out why rural environments increased the risk of PD. Do only those who actually farm have an increased risk or is it enough to live on a farm? Is pesticide exposure the reason for the increased risk? Well water exposure? Exposure to farm animals? Or is it another element of rural life?

In the end, epidemiologic data supports the assertion that each of these elements increases the risk of PD. Of note, all of the increased risks in these studies are small – on the order of 1.5-2 times the risk of the general population.

Has anything changed over time?

Since most of the studies concerning PD and rural living were done decades ago, a recent study sought to revisit this issue since farming life has changed in recent times. Pesticide use is reduced, there has been a large migration from rural to urban areas, and there is less dependence on well water in rural communities.

The new study was conducted in Finland and looked at the incidence of PD in rural versus urban areas. Interestingly, rural living remained a risk factor for PD. It is possible that current diagnoses of PD continue to reflect the environmental exposures of decades ago, and that risk reduction in rural areas due to decreased pesticide use and other changes in farming life may show more benefits in the future. However, the study suggests that we may not yet fully understand how the rural environment affects Parkinson’s risk.

Specific pesticides and their link to PD

The evidence that pesticide use is associated with an increased risk in PD, begs the question – are there specific pesticides that are most concerning? When data is collected on this topic in large populations, often the participants in the study are unaware of which specific pesticide exposures they have had.  This makes it difficult to determine which pesticides to avoid.

Some studies however were able to investigate the risks of specific chemicals. A recent review summarized the current state of knowledge on this topic. The chemical with the most data linking it to an increased PD risk is paraquat, with exposure associated with a 2-3 fold increased PD risk over the general population.

One particularly comprehensive study investigated exposure to 31 pesticides and their association with PD risk. From that data emerged paraquat and rotenone as the two most concerning pesticides.

Interestingly, both mitochondrial dysfunction and oxidative stress are common themes in our general understanding of what causes death of nerve cells in PD.

Of note, rotenone is often used by home gardeners and not necessarily on farms. It is extracted from plants and is therefore considered by some to be a “natural” pesticide. Nevertheless, it has been linked to PD in humans, and in fact is used in the laboratory to induce a Parkinson’s-like state in animals.

Although studies suggest that a rural environment increases risk of PD more than an urban environment, those who live in cities have their own pollutants to be concerned about. Numerous epidemiologic studies have investigated the role of air pollution in PD risk. A recent review summarized the current state of knowledge on this topic and analyzed the association between PD and various types of air pollutants including ozone, particulate matter of various sizes, nitrogen dioxide, and the airborne metals copper, mercury, and manganese. Results varied across studies but overall, data exists associating each of these components of air pollution with a small increased risk of PD.

There are many other chemicals in use today that may increase risk of PD. However, data is hard to come by and variable in conclusion. There is evidence that certain solvents and metals increase the risk of PD and additional studies are needed.

Exposure to pesticides in the military 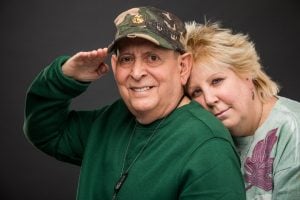 The effects of Agent Orange (and its contaminants) on both the Vietnamese population and on American soldiers has been studied extensively, but with much variability in the results. Birth defects have been attributed to Agent Orange exposure, as well as multiple types of cancer.

With the understanding that the Veteran community served selflessly on behalf of the American people and therefore deserve the protection and support of the American government, the Agent Orange Act was passed in 1991, allowing the Department of Veteran Affairs to declare certain conditions “presumptive” to exposure to Agent Orange, even if the scientific data associating Agent Orange with that condition was not airtight.

The list of conditions has grown over the years, and in 2010, PD was added. Read here about how veterans who may have been exposed to Agent Orange and have subsequently developed PD are eligible for VA healthcare and disability compensation.  APDA offers a free booklet specifically for veterans to help them find the care and support they need.

To support your local The Relationship Between Pesticides and Parkinson’s chapter, please click the button below: