Restless Legs Syndrome (RLS) is a neurologic and sleep-related condition characterized by an irresistible urge to move the legs. The symptoms respond to dopaminergic medications such as dopamine agonists or levodopa, which are also used to treat Parkinson’s disease (PD), making an association between RLS and PD likely. Here we explore RLS and its potential connections with PD. This post was adapted from content originally written by Dr. J Steven Poceta, neurologist and sleep medicine specialist.

What is Restless Leg Syndrome (RLS)?

There are certain features of RLS that make it a unique and specific disorder. 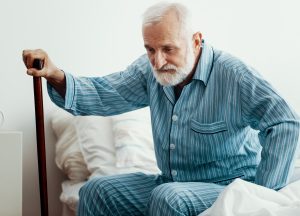 Because RLS is well-treated by medications that also treat PD, it is likely that some aspect of brain dopamine function is altered in RLS. However, unlike in PD, in which the deficit in substantia nigra dopamine-producing cells can be proven in many ways, no such abnormality has been shown in RLS. For example, studies show that DaTscan results are not abnormal in RLS.

Does having RLS increase the risk of developing PD?

Since RLS affects as much as 4-10% of the US adult population, it is clear that the vast majority of those with RLS do not ever develop PD.

Despite this, it still might be the case that RLS increases the risk of subsequently developing PD. There have been many studies trying to figure this out – with conflicting results. Some studies show that there is no increased risk and others show that having RLS confers about a two-fold increased risk of developing PD over the general population.

Is RLS more common in PD?

But what about the other possibility? Do patients with PD have an increased risk of RLS over the general population? Is it the same RLS as the person without PD has, or is it different? These questions have been difficult to answer. Of course, since PD affects about 1.5% of the elderly, and RLS in about 4-10% of the population, there will be some coincidental overlap. In addition to this however, patients with PD can have sensations that feel like RLS when their dose of dopamine medication is wearing off. These sensations are not truly RLS since they do not have the key features of RLS described above (more common at night, improves with movement, etc) and fluctuate with medication timing, but they can be easily confused with RLS by the person with PD.

Studies of people with PD that assess for RLS and compare to a control group are hindered by the fact that the majority of patients with significant PD are under treatment with medications that affect RLS. Over the years, there have been multiple studies investigating whether RLS is more common in PD than in the general population. Different studies come to different conclusions. Studies conducted in which a group of people with PD are directly compared to a group of people without PD (case-control study) typically show that RLS is more common in PD than the general population.

Treatment of RLS in PD

Regardless of the above discussion, it is clear that many people with PD have difficulty falling asleep because of annoying sensations in the legs accompanied by a sometimes unbearable sense of restlessness in the legs. For these people, taking dopamine agonists before bed can be helpful. Caution is in order, of course, because in some patients with PD, especially older or more advanced patients, these medications can cause confusion and hallucinations and are thus not well-tolerated. A long-acting levodopa formulation or medications such as gabapentin, gabapentin enacarbil and pregabalin can also be effective. Trying to address sleep issues such as RLS in patients who have sleep complaints can be an important aspect of maximizing therapy for PD.

To support your local Restless Leg Syndrome and Parkinson’s Disease chapter, please click the button below: