A discussion about navigating Parkinson’s and parenting 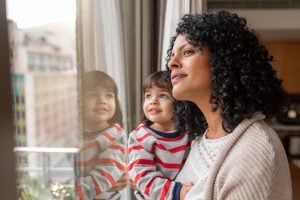 including (but not limited to) the challenges of dating, raising young families, and employment.

Navigating PD is challenging enough but add parenting into the mix and it’s a lot to tackle, both emotionally and physically. For today’s blog, I sat down with four people with PD — Harry, Rick, Bob and Cathy, as well as and Bob’s care partner, Charles (all names have been changed) to discuss the challenges of parenting with PD.

In some cases, the people with PD had their children after their diagnosis. In other cases, the children ranged from ages 1 to 14 when their parent was diagnosed.

Dr. Gilbert: How did you tell your children that you had PD?

Cathy: My children were very young when I was diagnosed – aged 2 and 3 ½ (now they are 13 and 15). I don’t recall their ages when I told them about my diagnosis, but I do know that they were still relatively young. It has never been a secret. This is the only way they’ve ever known me.

I remember using the booklet My Mommy has PD but It’s Okay from APDA. I sat down and read it to them and asked if they had any questions.

Harry: I was diagnosed when my son was 14. Now he is 16. I told him about PD when I was diagnosed. He is hearty stock and took it in stride. I said “This is not going to kill me. It’s something I have to manage.” My main concern was to deliver the news in a way so that he understood that there was no need for alarm. That I wasn’t dying.

Rick: I had one baby when I was diagnosed about 12 years ago.  Now I have two kids, ages thirteen and nine. They have always known Dad like this. There have been a few occasions when I have had short discussions about my PD with them.  They occasionally ask questions but that is pretty rare.

Bob: I have had PD for more than 16 years and our son is 11, so he hasn’t known me without PD. There was no single time where we sat him down and told him. PD has always been part of his life. More significant was when I had my DBS surgery, when our son was still small, age 5.

Dr. Gilbert: How did your children react to the news that you had Parkinson’s disease?

Cathy: They didn’t have much of a reaction. Either they didn’t notice anything unusual, or any symptoms they might have seen were just considered “normal” for me. It wasn’t like I was finally putting a name on something they noticed but were unsure about. It was really not a big deal. Like they just shrugged and thought “Okay. Can we go play now?”

Harry:  Because I delivered the news in a way that focused on the positive steps that I was going to take, he did not get upset about it. I talked about taking action: doing physical therapy, doing yoga, reading up on PD.

Dr. Gilbert: Bob, you mention that a bigger deal than telling your son that you have PD, was discussing your DBS surgery with him. What was his reaction to that news?

Bob: He had many questions and was very curious about the surgery.

Charles:  He asked if Bob was going to die.  I think as he thought about it more, he was concerned that the disease was possibly fatal or that Bob would die during the surgery.

Dr. Gilbert: Would you have done anything differently in how you told your children that you had PD?

Harry: I would not have done anything differently. I grew up in a house where people kept secrets. You could always feel a sense of stress in the house, but you didn’t know why.  I didn’t want that to happen in my house. I decided to have an open dialogue about PD and be positive about it.

Dr. Gilbert: How do your children react to your condition now?

Cathy: For the most part, they treat me as any child treats their mom. They rely on me to make their meals, clean their clothes, drive them to school and activities, help with projects, etc. My son, who is now 15, has just recently started being a bit more aware of when I have trouble walking and has offered his arm for support. They are understanding if I say I need to lay down for a quick nap sometimes. But for the most part PD is not in our daily conversation. We live a crazy busy life with two teenagers, and go about our busy-ness as if I didn’t have this disease.

Charles: There was a time when our son was extremely impatient with Bob as the disease progressed and Bob slowed down. That’s improved over time, but was hard on Bob initially. Our son wanted to be on-the-go constantly and couldn’t understand why Bob couldn’t move as fast as he wanted him to.  Part of that is being an active kid, of course.  He is more patient now and understands that Bob has to move at a different pace.

In addition, Bob has experienced a slowing down of speech and response time. This is difficult for all of us, including our son. Our son always wants to argue his case and challenge things – which he can do to Bob sometimes!  This can make it quite frustrating for Bob. Over time however, I think our son is becoming more empathetic.

Bob:  Lucky for me he is a very outgoing kid so he will talk to anyone, and especially if I need help out in public.

Rick: My kids are pretty used to seeing Dad shuffling around the house when my meds are not working.  I try to not ask them to do anything for me as I prefer to be as independent as possible.  That being said, my daughter will often open doors for me or offer to carry things when my feet are not working so well.

Harry: My son is a 16-year-old male. I try to maintain a dialogue, but over the last two years, he has gotten quieter. He is home less than before, spreading his wings, which is normal teenage behavior. A couple of weeks ago however – he said to me your walk is “mad-better”. He appreciates an improvement since diagnosis, which is great.

Dr. Gilbert: How does your PD currently affect your life with your children? Are there particular challenges that you can share with us?

Rick:  Both my kids are very active, playing numerous sports.  I would like to be able to help their teams more but I do not volunteer because the off time of my meds is unpredictable and I don’t want them, or their team, to rely on me for something and then not be able to follow through when the time comes.  So, my way of helping is I take photos at their games and then distribute the photos to all the parents.  It can be difficult at times to hold and shoot the camera when my meds are not working, but for the most part I can manage it.

Bob:  I have a rechargeable battery for my DBS system which I have forgotten to charge a few times and the system shuts off when this happens. It’s somewhat scary for my son to witness when my symptoms are that severe.

Charles: Meeting the daily needs of an 11-year old takes a lot of energy for anyone, let alone someone with PD.  Bob tries his very best not to let PD slow him down, but he often has to rest. He is also often a daredevil – doing tasks around the house that he shouldn’t be doing. I am a bit concerned that our son has to take on more than a regular 11-year-old. There are other people in our family with health problems as well. Let’s hope that it helps our son develop his caring side, but it can be exhausting to have disease surrounding you.

Cathy: I guess the biggest impact for me is when I have trouble walking. Some days, or parts of days, my hip stiffens up, and/or my foot twists, and/or my thigh cramps, making walking a challenge. My kids may have to slow their pace to wait for me. I wonder whether they are embarrassed when I walk funny, whether at a school event or other public place. But they’ve never indicated such to me.

Another challenge for me is the fatigue. For at least 1-2 hours each day I have a period of “fogginess” where I just feel so tired I can barely function, typically in the late afternoon. I wish I had the energy to go-go-go. For the most part I do okay, but sometimes I just have to take a rest. I do sometimes get concerned when the fatigue hits at a time I need to drive the kids someplace.

Harry: I try to find activities that bring us together. I invited my son to come to yoga with me, and he has come twice. When I met my personal trainer, I asked if he would train both my son and me. We have separate sessions, but have the shared experience. This creates a bond and a fun sense of competition and lets my son see the importance of exercise.

I have good days and bad days. On the bad days, I push myself to keep going. My son does not see me lying down and giving up.

I think about how next year we will need to tour colleges and how exhausting it will be. But we’ll get it done.

Dr. Gilbert: Thank you so much for your time and sharing your insights with the APDA community.

Cathy: Thank you so much for asking these questions. I realize we are a minority, but it is nice for someone to take interest in younger patients with PD who are still parenting. I hope this helps someone in some small way.

To support your local Parenting with Parkinson’s Disease chapter, please click the button below: