A frequently suggested blog topic is the role of nutrition in the management of Parkinson’s disease (PD). (Feel free to suggest your own topic). For a general overview of nutritional tips for someone with PD, I encourage you to view an excellent APDA webinar entitled Living Well Every Day, that is archived on our website. The webinar presents strategies, based on firm scientific evidence, that help support a healthy lifestyle for people with PD.

To cut to the chase, there is no one diet that is recommended for people with PD. However, the following specific diets are often asked about:

*As always, be sure to talk to your healthcare team before making and significant changes to your diet.

Popular Diets and their effect on those with Parkinson’s disease

The internet is full of claims that people with PD can benefit from a gluten-free diet. Many of these claims refer to a case report in which a man with signs and symptoms of PD but without gastrointestinal issues was found to have an unexplained folate deficiency, which led to a diagnosis of celiac disease. The treatment of celiac disease is adherence to a diet without gluten. Following a gluten free diet improved this man’s vitamin deficiency and his PD symptoms.

There is a wide constellation of other symptoms that can be caused by celiac disease including diarrhea, constipation, bloating, stomach cramping, fatigue, osteoporosis, and joint pain. Some of these symptoms are also common in people with PD and it would not be unreasonable to test for celiac disease in people with PD who have these symptoms. If vitamin deficiencies are found and malabsorption from the gut is suspected, then testing for celiac disease makes sense as well. Diagnosis of celiac disease can be made via a blood test to see if particular antibodies are found, followed by an endoscopy with biopsy to see if there is damage to the wall of the small intestine.

If a person is discovered to have celiac disease, then by all means he or she should follow a gluten free diet. The medical literature does not suggest however, that everyone with PD should adhere to a gluten-free diet without additional investigations. If you are concerned that you have symptoms suggestive of celiac disease, discuss them with your general doctor or neurologist who can order the appropriate testing if warranted. Otherwise, there is no need to go gluten free.

A ketogenic diet is a high fat, moderate protein and very low carbohydrate diet that forces the body to burn fat as opposed to carbohydrates. It is used clinically to control seizures in children with very difficult-to-control epilepsy.

It must be noted that the ketogenic diet is very restrictive and therefore very difficult to follow. In addition, it can pose health risks as well, especially to the elderly. It requires ingestion of high levels of fat which is linked to increased cholesterol and heart disease. It also requires a very limited ingestion of foods such as fruits and grains – foods that provide nutrients and fiber. With such a limited array of permissible foods, there is a risk of nutrient deficiencies. Constipation, which is often a non-motor feature of PD can be exacerbated as well with a ketogenic diet. Because of the restrictive nature of the diet, it can lead to weight loss, an effect that is not typically desired in the PD population which can have difficulty maintaining weight.

At this point, more data is needed about the benefits of the ketogenic diet for PD to determine if they outweigh the potential risks.

A Mediterranean diet is a diet traditionally eaten in Mediterranean countries characterized by large amounts of plant-based foods including vegetables, fruits, whole grains, legumes and nuts, 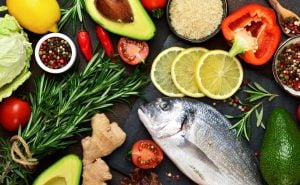 moderate amounts of low-fat proteins such as chicken and fish, and fats centered around olive oil.

Although more research is needed to understand the relationship between the principles of the Mediterranean diet and PD risk, its association with brain health and good health in general, makes it a good diet to model when considering food choices for someone with PD.

Some proponents of brain health suggest a hybrid of the Mediterranean diet and the DASH (Dietary Approaches to Stop Hypertension) diet which together is referred to as the MIND diet (The Mediterranean-DASH Intervention for Neurodegenerative Delay). The MIND diet has been associated with a lower risk of Alzheimer’s disease as well as lower risk and slower progression of parkinsonism in the elderly. Practically, there is much similarity and overlap between the Mediterranean and MIND diets.

The MIND diet is based on ten food groups to eat and five to avoid. The ten to eat include:

The five to avoid are:

These principles are very similar to the Mediterranean diet and the MIND diet is another reasonable model to follow for someone with PD.

To support your local The Role of Certain Diets for People with Parkinson’s disease chapter, please click the button below: