APDA is pleased to announce that $1.5 million in research grant funding has been awarded to support cutting-edge Parkinson’s disease (PD) research via four Post-Doctoral Fellowships, 11 Research Grants, and eight APDA Centers of Advanced Research as part of its 2017-2018 funding cycle.

The grants are awarded through a competitive application process and reviewed by APDA’s Scientific Advisory Board (SAB) which is comprised of scientists with a wide array of backgrounds and expertise in all areas relevant to PD research. The SAB meets annually to review all grant proposals and set the scientific direction of APDA’s annual research investment. Their focus is to identify researchers early in their careers and attract them to the PD field, as well as help established investigators pursue new and novel ideas. In many cases these projects produce significant pilot data, which has enabled researchers to apply for and receive multimillion dollar research grants from the National Institutes of Health and other funding institutions.

“There is an urgent need to accelerate research and support translational ideas that have the potential to truly improve the quality of life for people living with PD,” commented David G. Standaert, MD, PhD, John N. Whitaker Professor, Chair of Neurology at the University of Alabama at Birmingham, School of Medicine and Chairman of the SAB.“Now is a time of tremendous excitement in Parkinson’s research. The objective of the SAB is to invest in the best science that will move the field forward, to slow or cure the disease.” 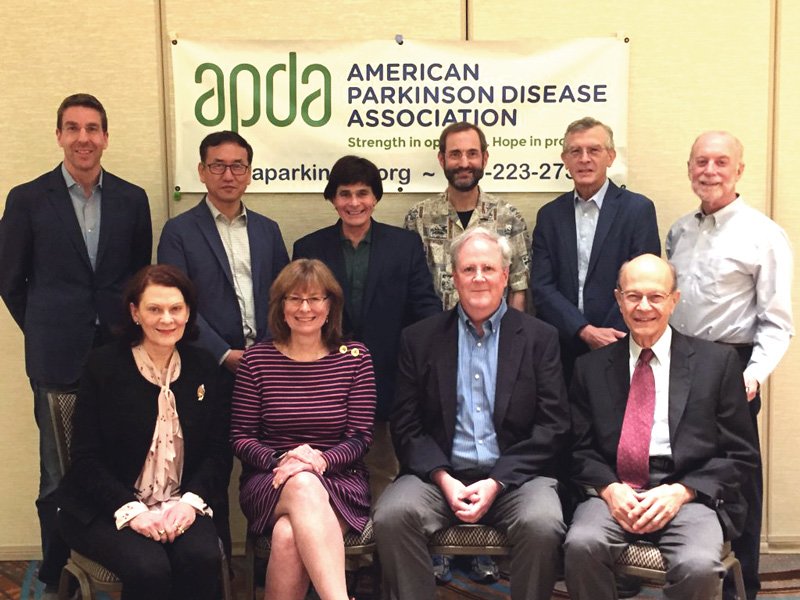 APDA Scientific Advisory Board met on May 22nd to review more than eighty-nine grant submissions all vying for nearly $1,000,000 in funding that will be awarded to both experienced and emerging young scientists in the Parkinson’s field.

APDA has been a funding partner in many of the significant Parkinson’s scientific discoveries in the last 50 years including the work of Dr. George C. Cotzias, which led to establishing the effectiveness of levodopa in treating PD; this treatment remains the gold standard in PD treatment today.

“The work being done as a result of the grants in this new funding cycle will have an incredible impact on the world of PD,” stated Leslie A. Chambers, President & CEO of APDA. “We are truly excited about the range of projects we are able to support – from neuroprotection that can slow the progress of the disease, to biomarkers which can help measure the activity of the disease, to novel ideas such as wearables and evidence-based non-medical therapies that can help improve quality of life. The questions posed by our researchers span a broad and exciting range of areas. This work is only possible because of the steadfast support of our generous APDA donors.”

Learn more about these grantees and the exciting work they are doing and browse all APDA-funded research by visiting our website.

To support your local $1.5 Million in Research Grants Awarded for 2017 – 2018 Academic Year chapter, please click the button below: