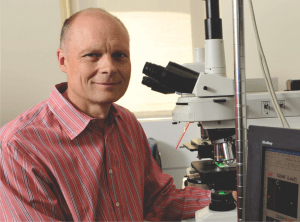 Dr. Kottmann received a PhD degree from the Max-Planck Institute for Immunobiology in Germany and post-doctoral training in neurodevelopment at the Center for Neurobiology and Behavior of Columbia University.  In 1999 he became first the director of molecular biology research and then vice president of research of the biotech start-up company PsychoGenics, Inc. In 2004 he returned to Columbia as a principal investigator and assistant professor of neuroscience. At Columbia, as a member of the center for Motor Neuron Biology and Disease, he developed a novel genetic, progressive model of PD. Since 2012 he has been Associate Professor in the Research Cluster for Neurodevelopment and Repair at the Center for Discovery and Innovation at the City College of New York.

This research will test whether the pharmacological manipulation (inhibition or activation) of the receptor protein “Smoothened” reduces the induction and/or the severity of L-Dopa induced dyskinesia (LIDs).  In a previous study, in part funded by APDA, it was discovered that the activity of cholinergic neurons in the basal ganglia is regulated by Smoothened activity.  This effort is devoted to finding adjuvant treatments that prevent LIDs without curtailing the beneficial effects of L-Dopa.  Positive results from this study could justify and make is possible to conduct clinical trials in Parkinson’s disease in short order since anti Smoothened compounds are already in clinical use in oncology.

Successful findings in the study have been  instrumental in winning NINDS funding (NINDS 1 R21 NS095253-01A1), which started on July 1, 2016. Dr. Kottmann will publish the current set of data produced through funding by APDA as soon as possible.