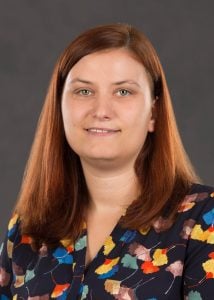 Dr. Nuytemans is a Research Assistant Professor in the John P. Hussman Institute for Human Genomics and the Dr. John T. Macdonald Foundation Department of Human Genetics. She received her PhD from the University of Antwerp in Belgium after which she came to University of Miami, initially as a post-doctoral Fellow, before advancing to her current position. Her research focuses on the genetics of neurodegenerative brain disorders. She has extensive experience working with ‘big data’ datasets including genotyping and next generation sequencing data, for the identification of common and rare genetic variants in disease. Dr. Nuytemans is specifically interested in Parkinson’s Disease (PD) as well as Dementia with Lewy Bodies (DLB) and Frontotemporal Dementia (FTD).

This project will evaluate the frequency and ancestral origins of known PD variants that were originally identified in non-Hispanic whites, in an initial Hispanic cohort.

PD affects individuals of all races and ethnicities; however, most studies of PD have been conducted in individuals of European descent (non-Hispanic whites). Though Hispanics now represent the largest minority group in the US, they are understudied in genomic research. US Hispanics are genetically diverse individuals, representing European, African and Amerindian ancestry, in different ratios, based on location and history of the individual’s ancestors. This study aims to evaluate the frequency of known PD genes in the Hispanic population.

We will recruit Hispanic patients through the University of Miami Hospital system. Patients’ charts will be reviewed for relevant clinical information and patients will undergo clinical PD exams, including motor and cognitive scores, in parallel with analysis of blood samples. Our hypothesis is that PD risk in Hispanic individuals is due both to genetic risk factors previously identified in non-Hispanic white patients as well as genetic factors specific for the African or Amerindian background represented in the Hispanic patients. We will characterize the frequency of known PD variants (previously identified in non-Hispanic whites) in Hispanic PD and in Hispanic control samples and correlate them with the particular genetic mix (ratio of European, African, Amerindian ancestry) of the patients.

Discovery of genetic contributions to PD risk in Hispanics would have a substantial influence on our understanding of PD overall and PD in the Hispanic population specifically. Studying the genetics of PD in Hispanics and other understudied populations is of critical importance as medical decision-making becomes more dependent on knowledge of an individual’s genetic makeup.

To support your local Karen Nuytemans, PhD chapter, please click the button below: