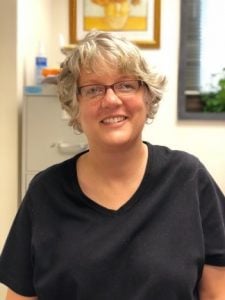 Dr. Elizabeth Disbrow received her PhD from University of California (UC), Davis in physiological psychology.  She then did a postdoctoral fellowship at the University of California, San Francisco (UCSF) in the Department of Radiology, studying brain imaging.  After training, she joined the faculty of both UC Davis and UCSF.  For over ten years she studied tactile and motor processing in healthy people, receiving several federal grants to support this work.  She then became interested in the pathophysiology of Parkinson’s disease (PD), especially cognitive decline.  She was awarded several federal grants to study cognitive dysfunction and rehabilitation in PD. In 2013, she moved to Shreveport to join Louisiana State University (LSU) Health Sciences Center School of Medicine.  She is currently a member of the Department of Neurology as well as the Department of Pharmacology, Toxicology and Neuroscience.  She is also the director of the new LSU Health Shreveport Center for Brain Health (lsuhscBrainHealth.com).

The goal is to identify a brain imaging biomarker of disease severity that is applicable to a diverse sample of people with PD.

Existing studies suggest that there are racial differences in the incidence and progression of PD. While the incidence of PD appears to be lower in the black compared to white population, progression may be steeper.  However, data from the African American population is sparse.    Recently we identified imaging markers of disease subgroups that were associated with rate of disease progression based on brain imaging markers of neuronal integrity in early stage PD.  We will extend this work to examine differences in disease severity across racial groups.

We will collect MRI, motor, cognitive and comorbidity data from black and white PD and control participants.  We will look at particular MRI features and examine the relationship between imaging data and clinical measures of disease severity across racial groups.

To support your local Elizabeth Disbrow, PhD chapter, please click the button below: