A growing number of people with Parkinson’s disease (PD) are interested in trying to improve both their motor and non-motor symptoms with therapies that are not medications. Beyond physical, occupational and speech therapy, all of which can play a crucial role in maximizing function in PD, there are a vast array of available complementary therapies. These include:

In past blogs, I have highlighted the positive benefits of certain creative pursuits such as art therapy and music therapy. Today, I will focus on manual practices such as acupuncture and massage therapy and their use in PD.

Acupuncture is a key component of traditional Chinese medicine in which thin needles are inserted into specific locations in the body in order to help relieve an ailment or issue. Acupuncture is based on traditional Chinese theory that disease is caused by disturbance of the body’s life force, qi (sometimes pronounced like “chee”). The acupuncture needles stimulate specific points in the body which are thought to release qi, rebalancing the flow of qi along channels in the body known as meridians. 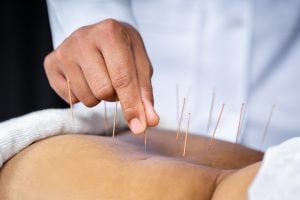 Today’s Western practitioners of acupuncture have alternate theories as to the mechanism of action of acupuncture. One theory is that the acupuncture leads to the release of endorphins, or brain chemicals that can trigger a sense of wellness. Other theories are that acupuncture reduces inflammation in the body or increases nerve growth factors.

Acupuncture has been formally studied in clinical trials for a range of conditions, although many of the studies were not rigorously designed and involved only small numbers of patients. Data is most convincing for control of pain and nausea in a variety of clinical situations.

There have also been a number of clinical trials assessing the use of acupuncture for various symptoms of PD. Results are mixed, with some studies showing benefit and others not showing benefit.

Although some studies showed no improvement in motor symptoms after acupuncture treatment, recently, a randomized control trial of electroacupuncture for PD demonstrated an improvement in gait in those receiving acupuncture as recorded by body-worn sensors. In this study, the control group received a sham procedure to ensure that the participants in the trial were not aware whether they were receiving active treatment or not. (A sham procedure is one that resembles the treatment under study, but is not the actual procedure. By performing a sham procedure on controls, it allows the trial to be blinded, with participants unaware if they received the actual treatment or not.)

A recent clinical trial evaluated the use of acupuncture to treat the pain of PD. The sample size was very small (9 in the acupuncture group and 7 in the control group). The groups were not randomized – those that wanted to get acupuncture were put in the acupuncture group. The groups were also not blinded – both the researchers and the patients knew who received acupuncture and who did not. Although the trial did have these notable limitations, a statistically significant difference was seen in the King’s Parkinson’s Disease Pain Scale (a survey tool for screening pain in PD) between those who received acupuncture and those who did not. A larger trial which is randomized and blinded will need to be done to confirm these results.

Another recent study evaluated whether acupuncture is useful for fatigue in PD. This trial was randomized and a sham procedure was performed on the controls. In this trial, there was no difference seen between those who received actual acupuncture and those who did not. These results were similar to other studies that evaluated the effects of acupuncture on fatigue.

Other studies are in planning stages, including one investigating acupuncture as a treatment for constipation in PD.

While data analyzing the role of acupuncture in treatment of PD symptoms is fairly limited, the data on the role of massage in the treatment of PD symptoms is even more so. One clinical trial was done assessing the effects of a 40-minute massage session, with some participants then continuing to receive seven weekly sessions. The control group was not blinded to their status (that is, they did not receive a sham procedure and therefore were aware that they were in the control group). Despite these limitations, the study showed that massage was helpful in improving quality of life for people with PD. 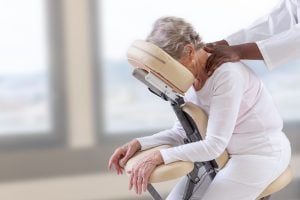 All of the above begs the question – should a person with PD try acupuncture or massage to help their PD symptoms? The bottom line is that there is little formal evidence that either treatment is truly effective. Larger and better designed clinical trials are necessary before these treatments will be routinely recommended.

For now, people with PD can choose to make their own assessments about whether these practices improve their well-being and whether to incorporate acupuncture or massage into their weekly routine. In general there is minimal risk in trying acupuncture or massage, aside from perhaps disappointment if they do not work for you. If you plan to try acupuncture and/or massage, be sure to go to reputable practitioners, preferably ones with experience in treating people with PD.

It is important to note that any of these therapies should be use in conjunction with the medical treatment(s) prescribed by your health care team. Before beginning any new or potential treatments always discuss it with your doctor.

To support your local The use of acupuncture and massage for Parkinson’s disease chapter, please click the button below: