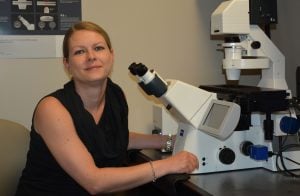 Pathophysiological relevance of phospho-ubiquitin to genetic and environmental Parkinsonism

Dr. Fiesel, is an Instructor for Neuroscience in the Department of Neuroscience at Mayo Clinic in Florida. She received her MSc in Biology from the University of Stuttgart in 2005 and earned a PhD in 2010 from the Eberhard-Karls-University in Tuebingen, Germany. She then continued her training as a post-doctoral fellow in the laboratory of Dr. Philipp Kahle at the Hertie-Institute for Clinical Brain Research, Germany before joining the lab of Dr. Wolfdieter Springer at Mayo Clinic, Jacksonville in late 2011. She is interested in the molecular and cellular mechanisms contributing to Parkinson’s Disease and has developed screening assays for the detection of Parkin activation by automated High Content imaging. These have been used to identify Parkin’s coenzymes in a functional genetics approach and to determine defects of Parkin mutations that have been genetically associated to PD.

Mitochondrial dysfunction is increasingly appreciated as a key determinant of dopaminergic neuronal susceptibility in Parkinson’s Disease and is a feature of both familial and sporadic disease, as well as in toxin-induced Parkinsonism.  The goal of this study is to explain the presence of mitochondrial stress upon treatment of cells with Parkinson’s Disease toxins and in human brain samples from patients with sporadic PD.  This study will help to better determine the role of mitochondrial dysfunction for disease pathogenesis and will help to establish mitochondrial quality control as a potential therapeutic target.

To support your local Fabienne Fiesel, PhD chapter, please click the button below: