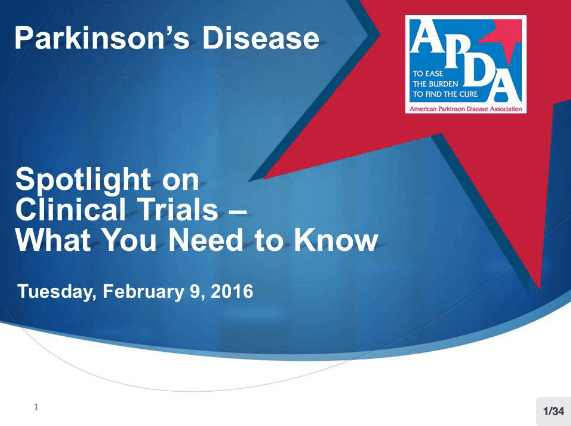 Clinical trials and their participants have revolutionized Parkinson’s treatment, and have changed the lives dramatically of those affected. They have made available treatment including levodopa, dopamine agonists, MAO inhibitors, COMT inhibitors. All these medications have been approved because people have participated in trials. They’ve improved the delivery methods of medications such as long-acting formulations of medication, patches, infusion pumps, inhalable medication. Deep brain stimulation, the role of genetics in Parkinson’s, the importance of exercise in Parkinson’s—all thanks to clinical trial research.

The Role of Clinical Trials in Parkinson’s Research

Clinical trials are studies in which a group of participants receives a specific treatment—medications, surgeries, even non-medical treatment. The researchers then assess the intervention, and whether the treatment is beneficial or not.

Clinical trials are vital to Parkinson’s treatment because they provide us with a lot of important information:

To better explain how clinical trials fit into the landscape of Parkinson’s treatment and research, here are some examples.

So, who sponsors clinical studies?

Everybody knows that pharmaceutical companies sponsor studies, but there are also government agencies and some private foundations. For example, the National Institutes of Health are now funding the STEADY-PD study. They are studying an old blood pressure pill called isradipine to see if it’s slowing down the Parkinson’s disease progression.

How to Find & Participate in a Clinical Trial

As Ray James, BS, RN highlights in the webinar, you definitely want to talk with your healthcare team before participating in a clinical trial. They’re an important resource. They know you best. They help to give you a lot of options and think about a balanced approach to your decision. And when you’re ready to look for clinical trials, there are several great options.

For more detail into observational studies (different from clinical trials), phases of clinical trials, and clinical study design, access the webinar or read the full transcript.

To support your local Spotlight on Parkinson's Clinical Trials – What You Need to Know chapter, please click the button below: