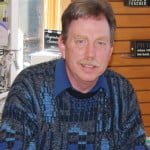 I am now 58 years old and was diagnosed with Parkinson’s Disease in 2009. My symptoms began by feeling very stiff and sore. I have not learned that this is called rigidity. I also have myoclonic jerks, cognitive difficulties, balance issues at times and fatigue. The meds help tremendously.

I ended up losing my job and wasn’t sure what to do. Since I liked to write and I like humor, I began writing my memoir. I ended up with a file of humorous Parkinson’s Disease stories. I found that I enjoyed writing humor. Not only because it is fun, but it is play and helps me feel better physically.

Through encouragement from other Parkies and my support group at the time, I compiled them in a book called, “I Forgot That I Remembered.”

I submitted humorous stories from my life to various publications and some were published. I even won some awards at Humorpress! Many of those stores are in my second book, “Just Me, Humorous, Helpful & Odd.”

Years ago, I did Gospel ventriloquism and wrote my own skits. When I found myself without a job, I compiled those skits into a book, which is my most recent book. It is entitled, “I Know What You Know, Adventures in Gospel Ventriloquism.” I got out my old figures and set out to video each character with an accompanying skit. The large plush ones were difficult to operate because they made my hands hurt. I donated most of the characters to my church. I still have Danny B Wood, his dummy Joey, SNAFU, and I am working on Skully…

To support your local Kevin chapter, please click the button below: