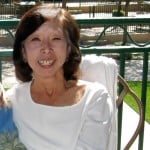 My Dad passed away in March, 1993, and Mom’s hands were shaking. At that time I had no clue about Parkinson’s Disease. In the beginning Mom continued to live her life without blinking an eyelash. I gave her encouragement—advising her to exercise her legs by getting a stationary bicycle and reading aloud to help her speech. But she was despondent about her condition and thought a ‘pill’ would cure her condition. Well pills did help control her ‘shakes’ and ‘unsteadiness’ and she managed her life with the help of relatives and neighbors for nearly 11 years. But after awhile my cousin, who was her main support, called me with news that I never wanted to hear. At that time I was a r.e. manager who was on a career path. My cousin helped but said Mom’s condition was deteriorating and said there was going to be a point in time when she wouldn’t be able to live alone and I should move her in to live with me while she was able to assimilate. I knew she was right and I didn’t have much of a choice. Initially she cried a lot, but I was determined to make her assimilate! I took her to a senior citizens’ center. We knew no one but Mom’s aura drew her new friends. That lasted awhile until the time came when she needed more care and I had to move her to an AL facility. I knew Mom wasn’t thrilled about the move but she was a real trooper and fell right into the program and became everyone’s darling. Mom wrote the book on how to live graciously with her frailties, including PD.

To support your local Karen chapter, please click the button below: