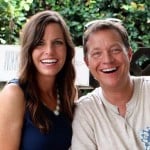 Young Onset Parkinson’s Disease became a personal and family challenge in 2008. It’s like coming home from a great day and finding an unwelcome stranger in your home except you can’t throw him out…no matter how much he repulses you. So you embrace him, try to control him and make him part of your life as much as possible. Just when you think you know him and what to expect he changes it up and tries to pull everything apart. So…we just pull him closer and try so hard to understand.

My family has had even less choice in the matter. Allison said “I do” to my Parkinson’s long before she said it to me. Our four year old has grown up waking Dad from sleep attacks and the older kids know exactly how to “break” a freeze. We all have learned patience more than most. The YO Center was one of the first resources my wife and used online when first diagnosed. We spent many late night hours on the site. Also, we attended a YO conference sponsored by APDA in Sacramento area a few years ago which was very inspiring!
I will use this section to share the challenges and celebrations of this corner of our life as we hope, pray and work towards a cure. Until then….BRING it ON! Parkinson’s Disease doesn’t stand a chance against US!

To support your local Eric chapter, please click the button below: