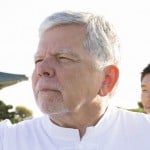 I retired after a 26 year career in the US Air Force Brett Watterson gained a deep background in the United States Space effort. After transitioning as a Colonel, I joined NASAʼs Jet Propulsion Lab and later came to the Aerospace Corporation.

While in the Air Force, I was hand-picked to serve as a crew member aboard a space shuttle mission, STS-62A, and assigned to NASAʼs Johnson Space Center for advanced mission and flight training. This unique space shuttle flight was to be launched into polar orbit and carried a payload of diverse scientific instruments. The mission was cancelled in the aftermath of the Challenger loss.

In retirement, I have concentrated on becoming as healthy as possible, through specialized medical teams and movement and exercise to include aqua aerobics, Tai-Chi, Yoga, weight training and cardio-vascular activities

My goal in participating in this PSA was to be proactive in the fight against PD, and attempt to portray that there exists hope and promise in the future.

I have chosen to be optimistic about my Parkinson’s Disease diagnosis and show that optimism by exploring an array of new medical technologies that are being advanced on a broad front of disciplines. I believes that an active research effort, combined with grass roots support and out-reach, position the realm of Parkinson’s Disease sufferers to be on the cutting edge of advancement and hope for the future.

To support your local Brett chapter, please click the button below: