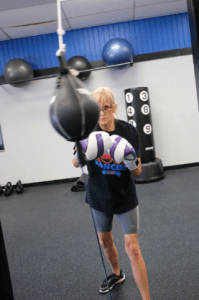 When I was diagnosed with PD 5 years ago, I had no one to support me through this journey. I felt alone in the middle of a huge storm. But shortly after diagnosis, I found APDA. It was there that I was given something my father, who also had PD, never had. I was given a family, a group of people who were there for me when I had a question or when I just needed someone to talk to. They helped alleviate the stress of the diagnosis. They were there for me no matter what was happening in my body. As my relationship with APDA grew, I was given a support system of people to exercise with and just enjoy life with in spite of this disease. Later, I became the photographer for APDA, and I found purpose again. I found a way to give back in the midst of the battle. It was there I found the “warrior” in me. And every day, I choose to fight for me and for my dad, my uncle, my cousin and my friend, all who are fighting alongside of me.

To support your local Tell Your Story chapter, please click the button below: